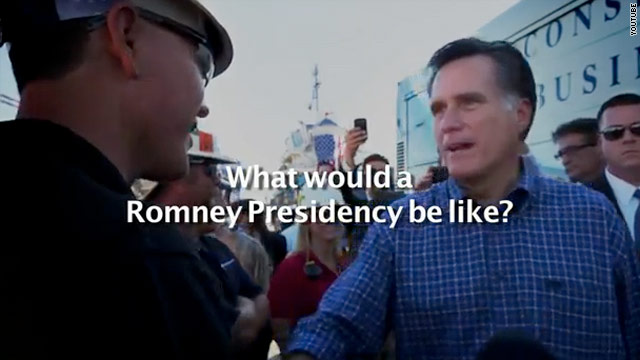 Washington (CNN) - Mitt Romney, the likely GOP presidential nominee, is using his first general election ad to highlight the policy priorities he would enact on his first day in office, asking voters, "What would a Romney Presidency be like?"

The spot, titled "Day One," began airing Friday in Iowa, North Carolina, Ohio and Virginia - all battleground states. The spot says Romney, as soon as he took office, would approve the Keystone Pipeline, "creating thousands of jobs that Obama blocked."

The controversial proposed 1,700 mile pipeline would carry oil from Canada through the U.S. to the Texas coast.

President Barack Obama last January decided against issuing a permit that would have allowed construction of the pipeline. Republicans attacked the administration over the decision because they say it would not only promote energy security but also create jobs. Romney previously has said he would have approved it.

Environmentalists bitterly oppose the pipeline because of the damage the construction might cause.

The White House has said it will make a final decision on the project after the election.

The Romney commercial emphasizes some of the same policy ideas the candidate highlights on the stump, promising tax cuts that "reward job creators, not punish them."

The spot says on Romney's first day as president he would issue an order to begin replacing the Obama health care initiative "with common sense health care reform."

But Obama's campaign responded saying Romney's day one promises are empty, just like the promises he made in his 2002 Massachusetts gubernatorial campaign.

"Romney said he would use his business experience to cut spending and debt- but both increased under his watch and he left Massachusetts with the largest per-capita debt in the nation," Obama spokeswoman Lis Smith said in a statement. "Romney promised he'd use this same private sector experience to create jobs, but Massachusetts ranked 47th out of 50th in job creation and lagged the nation in almost all key economic indicators. And the one thing he did accomplish-implementing health care reform that was a model for federal reform-is now something he would undo on day one of his presidency."

As CNN reported Thursday, the campaign purchased at least $1.2 million of ad time in Ohio, North Carolina, Iowa and Virginia for broadcast time beginning Friday and running through Tuesday, according to a Republican ad buying source.

The campaign also released a Spanish-language version of the ad.

On Thursday in Jacksonville, Florida, Romney told reporters the campaign would be entering the high stakes ad wars soon.

"I certainly hope that you'll get a chance to see our first ad that will come up in a couple of days. It will be a positive ad about the things that I will do if I am president," Romney said.