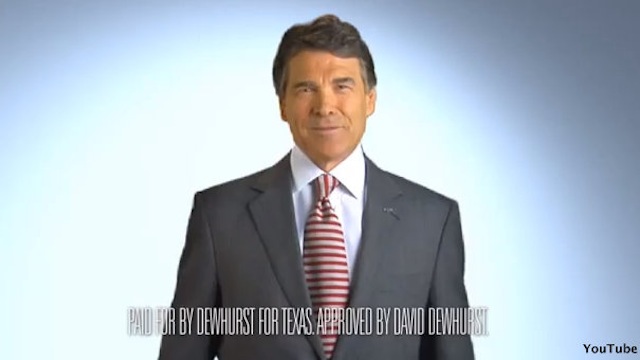 "We have a lot to be proud of," the former presidential candidate said in the ad released Monday. "That's why I'm proud to endorse David Dewhurst."

Perry first officially endorsed Dewhurst in April. The Senate candidate has served as Perry's right-hand man in Austin for nearly ten years and stumped for the governor during his unsuccessful presidential campaign.

Like many GOP Senate primaries this cycle, the race in Texas has shaped into a contest between a candidate with establishment support-Dewhurst-and a tea party favored contender with backing from national conservative groups-Ted Cruz.

In the polls, however, Dewhurst has long remained ahead of his rivals, including Cruz, and his campaign has fought hard to boost the lieutenant governor's conservative credentials against a tsunami of attack ads.

"David's the one candidate best prepared to make conservative change happen in Washington," Perry said in the ad. "Don't let anyone tell you different."

While Dewhurst has seen larger fundraising hauls than Cruz, his opponent has attracted national attention and significant spending from independent groups on his behalf.

FreedomWorks, a conservative grassroots organization, said it has dropped $150,000 into the race on get-out-the-vote efforts, while the fiscal group Club for Growth said it has spent a whopping $2 million, in addition to bundling $750,000 from its members directly into Cruz's campaign.

Perry's ad came after Sarah Palin threw her voice into the race. She endorsed Cruz earlier this month in a nod that the campaign credits with sparking a "huge surge."

Early voting has already started in Texas, with the final contest date set for May 29. Dewhurst would need to win 50% of the vote in order to avoid a run-off primary this summer.