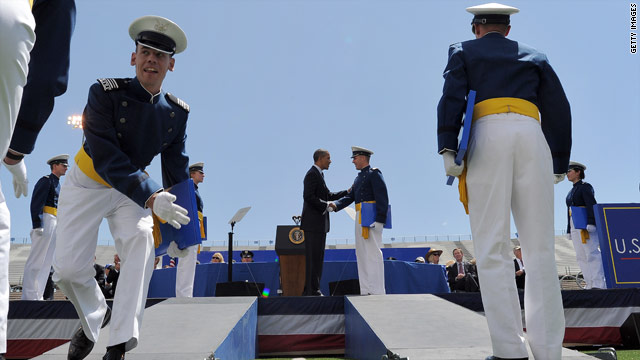 BREAKING: Colin Powell sides with President Obama on same-sex marriage in interview with Wolf Blitzer on CNN’s “The Situation Room".

BLITZER: You were chairman of the Joint Chiefs when you installed don’t ask, don’t tell, but what about gay marriage? Are you with the president on this?

POWELL: I have no problem with it. And it was the Congress that imposed don’t ask, don’t tell. It was certainly my position and my recommendation to get us out of an even worse outcome if you recall. But, as I have thought about gay marriage I know a lot of friends who are individually gay but are in partnerships with a loved one and they are as stable a family as my family is. And they raise children. So I don’t see any reason not to say that they should be able to get married under the laws of their state or the laws of the country. … In terms of the legal matter of creating a contract between two people that is called marriage and allowing them to live together with the protection of law – it seems to me is the way we should be moving in this country. And so, I support the president’s decision and I think most Americans increasingly understand that times have changed just like they changed between gays in the military and when I was able to support removing that barrier to service. So, I hope everybody will just carefully look at this. And I understand the religious objections to it but at the same time we are a country that is open to diversity and change and my experience with many of my gay and lesbian friends is that they form unions as strong as any other unions I have seen and raise children that are good strong children and are either heterosexual or homosexual or lesbian depending on themselves, not because their parents happen to be.

TRAIL TRIVIA
(Answer below)
What president was recovering from an athletic mishap on this day in history and what kind of accident forced the president to recover?

Words and tone of a speech can be very powerful, especially when it is the president of the United States addressing the nation’s future military leaders.

Just a few a few hours ago, President Obama appeared before the graduating class of the Air Force Academy, a group of elite men and women who have spent four years studying English and history, mathematics and science and preparing to play critical roles in helping defend the country.

His speech reminded us of another commencement address he gave two years ago to the graduating class of West Point.

There were many similarities in the two speeches, no surprise given that there are only so many themes a president can use in an academy commencement address, such as granting “amnesty” to the cadets who got in trouble for minor offenses.

But there were also stark differences. At critical points in Obama’s speech, the words and the tone were different.

In 2010, Obama spoke in a more sullen way. “We face a tough fight in Afghanistan,” Obama told the cadets. “Any insurgency that is confronted with a direct challenge will turn to new tactics. And from Marja to Kandahar, that is what the Taliban has done through assassination and indiscriminate killing and intimidation.”

Two years ago, Obama also talked about the personal sacrifice the cadets were making “knowing your service would send you in harm’s way.”

“So cadets, a long and hard road awaits you,” he told them toward the end of the West Point speech. “You go abroad because your service is fundamental to our security back home.”

Today, the president acknowledged that the Air Force Academy cadets were still very much at risk at finding “yourself in harm’s way,” just as he told the West Point cadets in 2010. But his tone had changed. The president spoke of Iraq in the past tense, he highlighted the death of Osama bin Laden, he said that al Qaeda was “on the path to defeat” and he talked about the war in Afghanistan ending.

Obama might be criticized by his opponents for using this speech to trumpet his military and foreign policy accomplishments and goals. We will let others be the judge of that.

For now, we just want to say thank you to our young men and women, our mothers and fathers, brothers and sister, daughters and sons, friends and relatives who make the ultimate sacrifice every day defending our nation.

Leading Drudge: The 46-Hour Window
Greece may have only a 46-hour window of opportunity should it need to plot a route out of the euro. That’s how much time the country’s leaders would probably have to enact any departure from the single currency while global markets are largely closed, from the end of trading in New York on a Friday to Monday’s market opening in Wellington, New Zealand, based on a synthesis of euro-exit scenarios from 21 economists, analysts and academics.

Leading Politico: Republicans target Biden over gaffes
Joe Biden is not the most popular man in the White House these days after he forced his boss to speed up his announcement favoring gay marriage. But Republicans are hoping that focusing on the gaffe-prone vice president will turn him into even more of a perceived liability.

Leading New York Times: Leader of ’76 Insurgency Is Now a Target of One
A conservative firebrand identifying himself as a nonpolitician denounces the economic and moral decay of a liberal agenda run amok in Washington, and urges voters to boot out a crusty incumbent who has fallen in love with his own reflection. Sounds like Tea Party 101, right?

Leading CNN Money: Romney: I'll get unemployment down to 6%
Mitt Romney told TIME he will get the unemployment rate to 6% by 2016. But even if he does, that might not mean a lot of jobs will be added.

- Retiring Lieberman still on listening tour –
SEN. JOE LIEBERMAN ON “JOHN KING, USA” AT 6 P.M. ET ON “DOES HE KNOW WHOM HE IS VOTING FOR”: “I don’t yet, no. I’m watching very carefully and listening carefully and as an independent, like most independents I’ll not vote based on party, obviously, but based on who I think will be the person who could best secure the future of our country.”

- Blame it on Cartagena -
MARK SULLIVAN, DIRECTOR OF THE U.S. SECRET SERVICE, AT A CONGRESSIONAL HEARING: “This is not a cultural issue. This is not a systemic issue with us. These are just 12 – you know, we make decisions every single day. Our employees make some really critical decisions that, again, the overwhelming majority of the time they make good decisions. On this particular trip we had some individuals who made some very bad decisions.”

- Former Romney spokesman reflects on leaving the campaign -
RICHARD GRENELL, A FORMER ROMNEY SPOKESMAN, IN AN INTERVIEW WITH FOX NEWS: “It became clear to me that there were many people on the left and the right that really wanted to keep me in a one-dimensional box and have me just talk about being gay or my position on gay marriage. … I think it’s ludicrous. I’m like most Americans, (in) that I have multiple views and we don’t always agree with the candidate that we support or work for on every single issue. I don’t think that should be news, so for me I became a distraction, a distraction for the issues I most care about: national security, foreign policy. I really wanted to talk straight to the American people about the president’s record. I think it’s a dismal record and I think most people should look at multiple issues when they decide in November who to support for president.”

After doctors suggested that former President George W. Bush take up mountain biking to get more exercise, Bush decided to take his doctor’s advice. Little did he know that the sport would become a hazard to his health.

Bush fell off his bike in the 16th mile of a 17-mile course at his Crawford, Texas, ranch, according to reporting from May 23, 2004. The fall caused a few scratches on Bush’s face, hands and knees, but he finished the course anyway. After the fall, White House press staff informed the media that Bush might attend his daughter’s graduation party with a bandage on his chin.

The Crawford fall may have been Bush’s first reported bike accident while in the White House, but it was not his last. On July 7, 2005, President Bush collided with a British police officer during a bike ride in central Scotland, leaving the president with scrapes on his hands and arms and sending the police officer to a local hospital.

Gut Check Winner’s Circle
(why aren’t you in it?)
Congratulations to Matthew Gilbertson (@MattRGilbertson) for correctly answering today’s trivia question. Gilbertson will receive some CNN swag for his correct answer, as well as the eternal glory of being mentioned here.