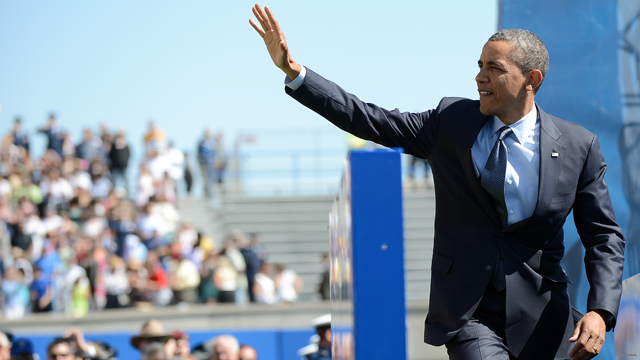 Washington (CNN) - On the day Mitt Romney reached out to Latino voters at a gathering in the nation's capital, a new poll indicated that he has his work cut out for him.

The NBC News/Wall Street Journal/Telemundo poll is the most recent survey to indicate the president has an extremely large lead among Latino voters. And the poll's Wednesday release came as Romney addressed the Latino Coalition at an event at the U.S. Chamber of Commerce, where the former Massachusetts governor proposed dramatically expanding school choice for low-income and disabled children.

Romney did not bring up the topic of illegal immigration at the event. The candidate's hard stance on the issue during the race for the GOP nomination may have hurt him with some Latino voters.

According to the poll, just 26% of Latinos viewed Romney positively, with 35% saying they see him in a negative way. The survey indicated Obama has a 58% favorable rating among Latinos, with 23% viewing him in a negative light.

According to exit polls, then-Sen. Obama of Illinois captured 67% of the Latino vote in the 2008 presidential election in his victory over Sen. John McCain of Arizona.

The NBC News/Wall Street Journal/Telemundo poll, which is an oversample from a new NBC/WSJ poll, was conducted between May 16 and May 21. Three hundred adults, who identified themselves as coming from a Latino or Spanish-speaking background, were questioned by telephone. The survey's overall sampling error was plus or minus 5.7 percentage points.