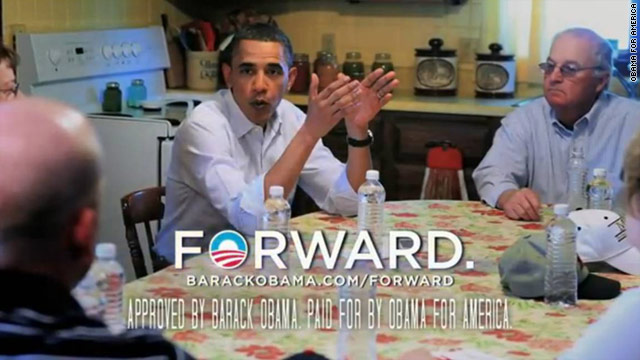 (CNN) - President Barack Obama's re-election campaign is out with two new TV ads Wednesday that tout what they say are the president's commitment to preserving Medicare and his pledge to honor the country's veterans.

The campaign says the commercials are part of their previously announced ad buy of $25 million to run spots this month in many crucial battleground states.

"To you and your loved ones, Medicare is personal. And to a president raised by his grandparents, it's personal too. And starts with protecting your Medicare from health care scam artists who prey on seniors," says the narrator in a spot titled "Personal."

The narrator then asserts that "President Obama is leading the most successful crackdown on health care fraud ever. Already recovered $4 billion from health care scams last year alone, to preserve health care now and for the future. A commitment to Medicare as personal as yours."

The spot is running in Florida and South Carolina.

In the spot titled "Sacred Trust," the president speaks into the camera and says, "The sacrifices that our troops have made have been incredible. It's because of what they've done that we've been able to go after al Qaeda and kill Bin Laden and when they come home we have a sacred trust to make sure that we are doing every thing we can to heal all of their wounds, giving them the opportunities that they deserve to find a job and get the education they need. It's not enough to just make a speech about how much we value veterans. It's not enough just to remember them on Memorial Day."

The ad is running in Florida.

The Romney campaign reacted to both new spots.

"President Obama and his campaign can't distract voters from three years of broken promises on Medicare and our commitments to our veterans," said Romney campaign spokeswoman Amanda Henneberg. "In a week when his own supporters called his campaign attacks on free enterprise 'nauseating' and 'very disappointing,' President Obama is now trying to rewrite his record in an attempt to change the narrative on his campaign's terrible week."