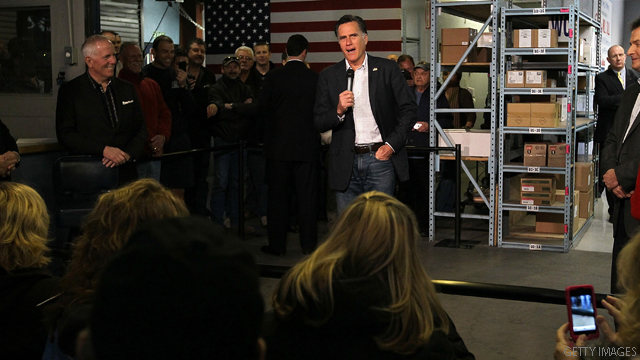 (CNN) – It brought nearly immediate attacks from his rivals, and even a mocking ringtone: Mitt Romney's January comment that he "likes being able to fire people." But in an interview published Wednesday, the GOP candidate acknowledged that it is one moment that makes him "try and be a little more careful in what I say."

"I have to think not only about what I say in a full sentence but what I say in a phrase," Romney told The Wall Street Journal columnist Peggy Noonan, because comments are "taken out of context, you'll be clipped, and you'll be battered with things you said."

Romney made the "fire people" comment at a New Hampshire campaign event in January while taking audience questions.

"I like being able to fire people who provide services to me," he said. "If someone doesn't give me a good service that I need, I want to say I'm going to go get someone else to provide that service to me."

The comment was one in a series of statements that were then used against the former Massachusetts governor to paint him as out of touch with average Americans.

Days before the "fire people" statement, Romney - who became a millionaire over his career in private equity - said there were times he was concerned for his job.

"I know what it's like to worry about whether you're going to get fired," Romney said. "There were a couple of times I wondered if I was going to get a pink slip."

And at a campaign stop in Florida last June, Romney joked at a roundtable with voters that - like them - "I am also unemployed."

Adding that he is "networking," Romney then said, "I have my sights on a particular job that I'm working for."

- CNN's Gregory Wallace and Justin Lear contributed to this report.