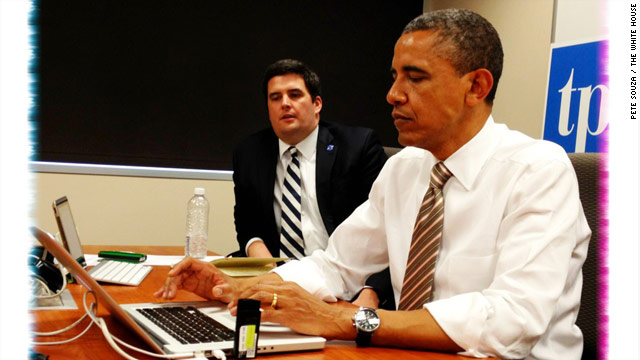 DEVELOPING… Obama campaign defends raising money from Bain employees to CNN’s Dana Bash: "No one aside from Mitt Romney is running for president highlighting their tenure as a corporate buyout specialist as one of job creation, when in fact, his goal was profit maximization," Obama campaign spokesman Ben LaBolt told CNN...

TRAIL TRIVIA
(Answer below)
“Never before has the voice and understanding of a concerned woman been so needed.” What famous female Senate candidate used this as her campaign slogan?

On Fridays, we like to take a step back and learn from the “masters of the political class” to see things from a different perspective.

Our question this week stems from President Obama framing his argument against Mitt Romney as a choice of political fairness vs. private equity.

Do you think the man who won running on "hope" is wise to run this time on the mantle of "fairness"? Why or Why not?

“For all the talk in the media about Bain and private equity, this attack on Romney has nothing to do with either of them. This is all about the Obama campaign trying to undercut Romney’s credibility as a job creator, and his character as a leader. It would likely be an effective attack if it was true, which it’s not, and if Obama himself hadn’t taken millions from the so-called “vampires” of private equity. I also have a hard time believing this race will be more about hypothetical job creation under a President Romney than it is about the very real lack of job creation under President Obama.”

Neera Tanden, President of the Center for American Progress (@neeratanden)

“Between 2008 and now, the country faces a near-cataclysmic economic dislocation, brought on by some decisions by Wall Street and overleveraging in the housing market. Those decisions hurt almost all Americans economically. And while we have had economic growth, that growth hasn't been broadly shared. Indeed, in 2010, 93 percent of income growth went to the top 1 percent. In the face of these facts, Republicans have chosen to double down on the policies they championed before the economic crisis: large scale taxes for the wealthy, and cuts to programs for the middle class. Despite the fact that from 2000 to 2008, we had both massive tax cuts, and the lowest average growth rate for the period of any decade since the 1950s, the GOP's only answer for growth is tax cuts and austerity. All of which disproportionately favor the rich and well-connected. So the President's focus on fairness is the right principle for the times and the right answer to the Republican party's insistence that really the only solution for growth is to make rich people richer through the tax code and other means.”

Leading CNNPolitics: The big tryout: VP possibles playing attack dog for Romney
Wanted: A political attack dog ready to tear into President Barack Obama. Must play by team rules, be able to withstand the pressure of a presidential campaign and pass a rigorous vetting process. – By Shannon Travis

Leading Drudge: Another Jobless Summer For Teens
Did somebody say McJobless? The American job market is no place for students as the number of employed high schoolers has hit its lowest level in more than 20 years, according to new figures from the National Center for Education Statistics. – By Ben Wolfgang

Leading Politico: Perry tests his strength in Texas
After a disastrous 2012 presidential campaign that left his national political profile in tatters, Rick Perry is now embarking on an all-out effort to revive his standing in Texas and prove he’s still a dominant force in the Lone Star State. – By Alexander Burns

Leading New York Times: Both Campaigns Seize on Romney’s Years at Bain
Mitt Romney’s campaign sees the time he spent at Bain Capital, the private equity firm he co-founded and ran for more than a decade, as a positive experience that highlights his leadership skills and his ability to turn around companies and create jobs. President Obama’s campaign, meanwhile, views Mr. Romney’s Bain Capital years as a political liability that underscores his image as an out-of-touch multimillionaire, concerned only with turning profits for his wealthy investors. – By Ashley Parker

Leading Boston Globe: Filings raise more questions on Warren’s ethnic claims
U.S. Senate candidate Elizabeth Warren has said she was unaware that Harvard Law School had been promoting her purported Native American heritage until she read about it in a newspaper several weeks ago. But for at least six straight years during Warren’s tenure, Harvard University reported in federally mandated diversity statistics that it had a Native American woman in its senior ranks at the law school. According to both Harvard officials and federal guidelines, those statistics are almost always based on the way employees describe themselves.

- Memorial Day Weekend Gut Check, Biden edition -
VICE PRESIDENT JOE BIDEN AT A SEMINAR FOR MILITARY FAMILES WHO HAVE EXPERIENCED A DEATH IN THEIR FAMILY: “When I was a 29-year-old kid I got elected to the United States Senate out of nowhere on November 7 and I got a phone call like you guys got or someone walking up to me. On December 18, I was down in Washington. I'm the first United States senator I ever knew and I was down in Washington hiring my staff and I got a phone call saying that my family had been in an accident and just like you guys know, by the tone of the phone call, you just knew, didn't you? You knew when they walked up the path. You knew when the call came. You knew. You just felt it in your bones something bad happened and I knew. I don't know how I knew but the call said my wife was dead. My daughter was dead and wasn't sure how my sons were going to make it. Christmas shopping and a tractor trailer broadsided them in one instant.”

- Future politicians: Watch Elizabeth Warren Not Answer 101 -
WARREN AND MYFOXBOSTON REPORTER SHARMAN SACCHETTI GO BACK AND FORTH ON WARREN’S HERITAGE IN TENSE EXCHANGE YESTERDAY: Sacchetti: Elizabeth, can you put this issue to bed and tell us whether or not, as a matter of fact, you are a member of a minority group. Warren: Middle-class families are getting hammered. I have been out here talking about this all across the Commonwealth. And what they care about are what Washington are going to do about that. My Republican opponent–Sacchetti: Members of the Cherokee Nation want to know. They say you should come clean.
Warren: I have made the facts clear and what I am trying to do is talk about in this Senate race, what matters to Americas families….

- Dear diary, It’s Me Mitt …. (Paging Bob Graham)–
PEGGY NOONAN WRITES ABOUT MITT ROMNEY’S CAMPAIGN JOURNAL IN HER LATEST WALL STREET JOURNAL COLUMN: “He keeps a campaign journal on his iPad: "Now this is going to make my iPad a subject of potential theft!" He used to speak his entries, but now he types them on an attached keyboard. "I've kept up pretty well, actually." He writes every two or three days, so that 10 years from now he can "remember what it was like," but also to capture "the feelings - the ups the downs, the people I meet and the sense I have about what's going to happen. It's kind of fun to go back and read, as Ann and I do from time to time.”

Lenore Romney’s campaign for U.S. Senate was truly a family affair. According to a lengthy story released by Time Magazine, Lenore was nearly forced into the race by her kin – especially after a family meeting on Christmas in 1969, where Lenore’s husband and former Michigan governor, George Romney, called the family together to implore their mother to run.

Of course one of those family members was the 2012 presumptive Republican presidential nominee – Mitt Romney, her son and close campaign confidant.

“Mitt Romney, the youngest of four children, was deeply engaged in his mother's campaign, far more than the ones his father ran when Mitt was young,” reads the Time article. “He accompanied her on hundreds of campaign stops, driving together across all 83 Michigan counties in a blue truck festooned with Lenore signs.”

Despite her pedigree, Lenore Romney’s campaign stumbled. “She had a hard time articulating what she was about. Nobody to this day is really sure what Lenore Romney was really for,” Bill Ballenger, editor of the political newsletter Inside Michigan Politics, told The Washington Post earlier this year.

Lenore went on to lose that campaign by a large 2-to-1 margin. According to the great Time magazine piece by Barton Gellman, Lenore was embarrassed, her husband blamed “everyone but himself,” and the young Mitt learned from the loss.

Congratulations to self-describted Star Wars enthusiast Jason Warner ‏(@JasonEWarner) for correctly answering today’s trivia question. Birthday boy Jonathan Gormley ‏(@JonathanGormley) must have been partying or else he would have answered correctly.

Since no one got the trivia right, we are going to salute Michelle’s dad, Joe, instead, who is in the winner’s circle for getting a hole-in-one this week on a golf course in Los Angeles. This was his second career hole-in-one but his first in his native California.