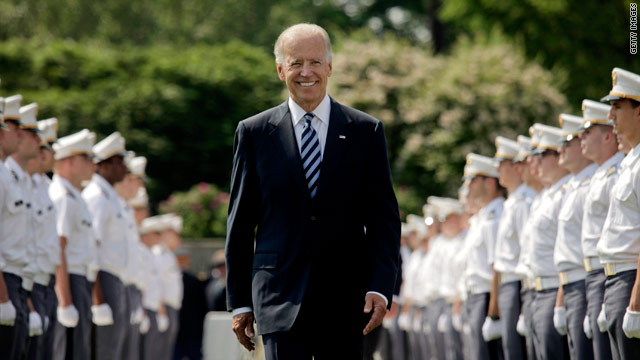 "President Obama and I came into office determined to end the war in Iraq responsibly, and today our troops are home," Biden said, underscoring a point he and Obama often make on the campaign trail.

"In Afghanistan, President Obama laid out a clear strategy," Biden said. "Our commanders re-focused and re-doubled their efforts on disrupting, dismantling and ultimately destroying and defeating al Qaeda. Reversing the Taliban's momentum and training the Afghan security forces to prevent extremists from gaining ground. Since then, we've taken out – you have taken out – more than half of al Qaeda's senior leadership."

Biden also hailed the killing of Osama bin Laden, saying the May 2011 raid sent a message to the world: "If you harm America, we will follow you to the end of the Earth."

Biden's commencement address came as he and Obama face an expected tough fight against former Massachusetts Gov. Mitt Romney, the presumptive Republican presidential nominee. Recent polling, including an NBC News/Wall Street Journal survey out Tuesday, shows voters give the president better marks for his handling of foreign affairs than the U.S. economy, consistently the top issue for voters.

At West Point, Biden made brief mention of the economy, saying economic competition with countries like China would continue to help American companies succeed.

"The most critical relationship to get right is that between the United States and China. Every day the affairs of our nations, and the livelihoods of our citizens, become more connected," Biden said. "How we manage this relationship between the world's two largest economies – though we're still almost three times as large as they are – how we do this will help shape the 21st century."

Biden said there was "no doubt America can compete and America will win" in challenges from abroad.

In his address, Biden referred to the incoming second lieutenants as members of the "9/11 generation," saying their decision to enlist reflected a particular dose of courage.

"Every single generation that's preceded you at West Point has faced daunting challenges upon receiving their commission, especially in times of war. But your generation, the 9/11 generation, is more than worthy of the proud legacy you'll inherit today," Biden said.

The vice president continued, "That tragic day need not have shaped your lives, but for so many of you, it did just that. As you and your immediate predecessors came of age, 2,800,000 of you were moved to join our military, knowing full well that you were likely to be deployed to Iraq and Afghanistan."