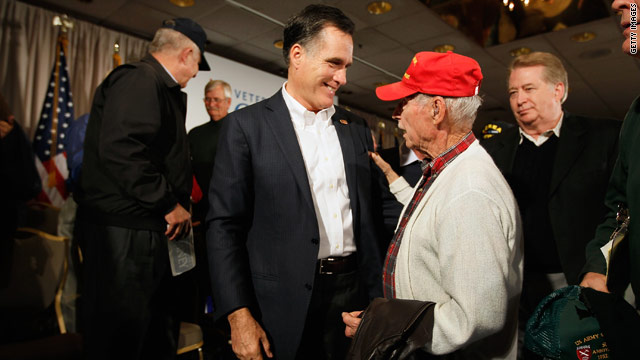 Fifty-eight percent of veterans support Romney, while 34% back the president, according to a new Gallup survey.

In recent weeks, polls have indicated significant gender gap between Obama and Romney, with woman more favorable to the president and men leaning more towards Romney.

Interestingly, the new poll shows that Romney's male advantage may be attributed to his lead among veterans, given that one in four men in the United States have served in the military. When taking into account only non-veteran men, Obama and Romney are essentially tied, the poll shows.

Among non-veterans overall (both men and women), however, Obama holds a four-percentage point advantage, 48%-44%, over his Republican rival.

Neither Romney nor Obama have military records, making the 2012 election the first race with non-veterans as candidates since the 1944 showdown between Franklin Roosevelt and Thomas Dewey.

To commemorate the holiday, Romney makes an appearance Monday with Sen. John McCain at the Veterans Museum and Memorial Center in San Diego, California, while President Barack Obama attends ceremonies at Arlington National Cemetery and the Vietnam Veterans Memorial on the National Mall.

Gallup pulled its data from its daily tracking survey between April 11 and May 24, with a random sample of 43,352 adults questioned by telephone. Of the sample, 7,133 were veterans. The poll's sampling error is plus or minus two percentage points.