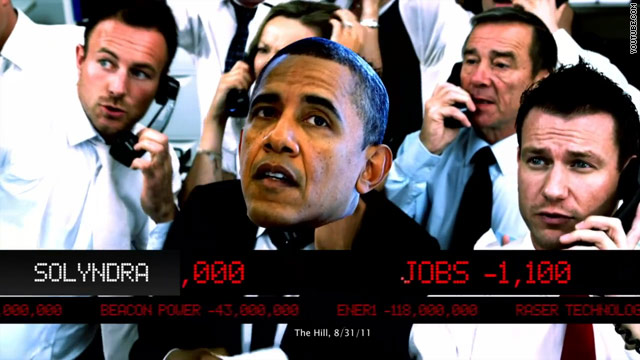 Republicans push back with 'public equity' criticism of Obama

(CNN) - Democrats have attempted to stick a "private equity" attack on Mitt Romney, and now, Republicans have a parallel attack of their own: President Barack Obama is the "public equity president."

The video singles out the auto bailout and loan guarantees provided to the clean energy company Solyndra, which filed for bankruptcy in August 2011 after receiving an Energy Department loan in May 2010.

Romney's campaign also brought up Solyndra in a Tuesday web video, criticizing the Obama administration for rewarding campaign donors with portions of ""billions of taxpayer dollars [given] to companies that later failed."

"Obama is giving taxpayer money to big donors and watching them lose it," a narrator in the Romney video says. "Good for them. Bad for us."

The American Crossroads super PAC and their ally, Crossroads GPS, gave no television buy for the web video, but have announced ad spending of $9 million since late April. They have produced television and radio spots, as well as other web videos, criticizing Obama's policies and labeling him a "celebrity president."

– CNN's Gregory Wallace and Paul Steinhauser contributed to this report