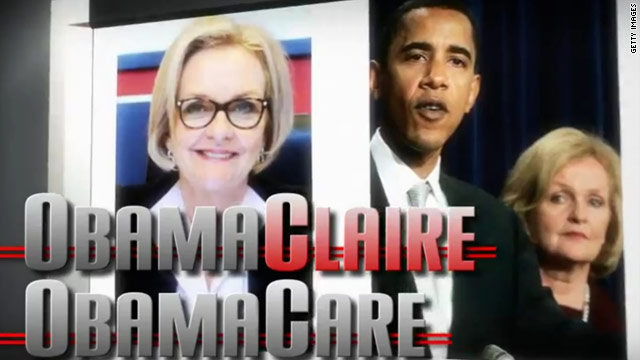 The conservative group Crossroads GPS looks to tie Sen. Claire McCaskill to the health care reform law and broader agenda of President Barack Obama in a new ad released Thursday morning, citing a study showing the Missouri Democrat cast nine out of 10 votes with the president.

"Obama-Claire brought us Obamacare, and that's bad medicine for health care," the ad narrator states. A vote analysis conducted by The Washington Post shows she has sided with her party on 81% of votes this term.

Crossroads is investing $516,000 on the ad against the first-termer, and told CNN it will air in St. Louis, Kansas City, Springfield, Columbia, and Joplin, as well as Paducah, Kentucky - across the Mississippi River from Missouri. It is the group's latest investment in the state, one of four it is focusing on this cycle.

The ad hits McCaskill for what they say are the results of the health reform law, including cuts to Medicare which would hurt seniors, and creation of "a board of unelected bureaucrats with the power to restrict seniors' access to medical care."

A spokesman for McCaskill said the ads, funded by "insurance companies," are airing dishonest "anonymous smear ads." Crossroads is in a category of groups which need not publish their funders.

"They are lying about Claire's record and they're lying that she voted to cut Medicare because she has always put Missouri's middle class families ahead of the insurance companies' bottom lines," spokesman Erik Dorey said in a statement.

At least three Republicans are in the race to challenge McCaskill, and will face off in a primary on August 7. A national tea party group, the Tea Party Express, is backing Republican challenger and former Missouri State Treasurer Sarah Steelman. Also in the race are 6-term Rep. Todd Akin and the former chief of Germ-X, John Brunner.

Crossroads GPS, a 501(c)(4) issue advocacy non-profit and the aligned super PAC, American Crossroads, are pouring millions into the presidential race, and American Crossroads said in late April it had raised $100 million so far this election cycle. Crossroads GPS is investing in US Senate races to be held this cycle in Massachusetts, Missouri, Montana and Nebraska.

The non-partisan Cook and Rothenberg political analysts rate the rate the race as a toss-up, with Rothenberg noting it as leaning Republican.