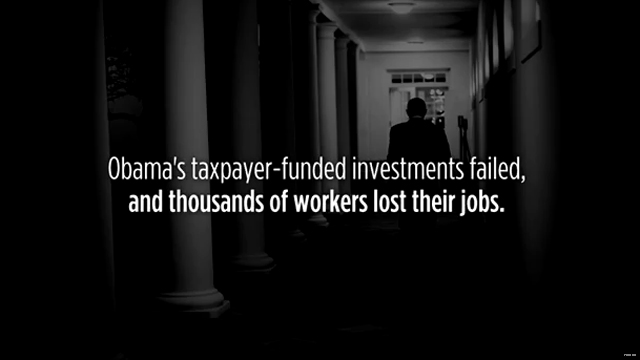 (CNN) – In keeping with the Republican message of the week – that President Barack Obama is bad for job creators – the Republican National Committee released a video on Thursday using the failed energy company Solyndra to bolster their message.

The minute-long video is a collection of news reports surrounding the solar energy company that received a government loan guarantee of over $500 million and later filed for bankruptcy.
- Follow the Ticker on Twitter: @PoliticalTicker

"Obama's taxpayer-funded investments failed, and thousands of workers lost their jobs," the screen reads at the end of the video. "Obama has yet to take responsibility."

RNC Chairman Reince Priebus said Solyndra exemplifies the president's record on job creation, and is further evidence of why presumptive Republican presidential nominee Mitt Romney, with his private sector experience, should win the White House in 2012.

"I guess we can't be surprised with the economic results we have received over the past three years. Barack Obama has never run a business. He's never met a payroll and hasn't created a single job. The only thing he's ever managed is his personal narrative," Priebus said in a statement. "America needs Mitt Romney in the White House because he's spent time in both the private and public sector and understands how to get Americans back to work."

Obama administration officials have defended the move as a disappointing result of baking innovative technology and vowed to continue investing in clean energy.

The latest RNC video follows one from the Romney campaign released earlier in the week that accused Obama of giving away "billions of taxpayer dollars to companies that later failed, including companies that were run by Democrat donors," and a similar message trumpeted by Crossroads GPS, an independent conservative group.