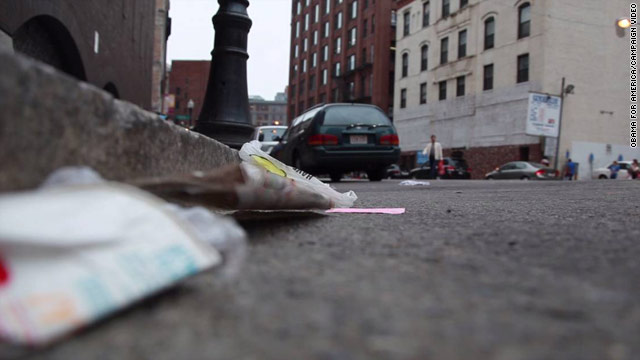 (CNN) – Mitt Romney's record as governor of Massachusetts received renewed scrutiny from his opponent's campaign Thursday in the form of a Web video, which uses Democratic officials from the state to discredit the GOP presidential candidate's time in the corner office.

The video from President Barack Obama's re-election team comes the same day David Axelrod, a senior strategist for the president's campaign, plans to hold a press conference at the Massachusetts State House in Boston to highlight what he says is a record of unfulfilled promises.

In the video, mayors and state legislators look back at Romney's tenure as governor and compare his campaign promises to results in Massachusetts. On jobs, the officials slam Romney for not developing solutions to an outflow of manufacturing positions.

"We knew that we were losing manufacturing jobs, and he never found any solutions to try and figure out how we going to keep them," Jeffrey Sánchez, a state representative, says in the video. "By the time Mitt Romney left office we were 47th in the nation in terms of job growth."

That statistic, cited frequently by Obama's campaign, is technically accurate, though the nonpartisan PolitiFact rates the assertion as only "half true," noting that it's a stretch to entirely blame Romney (or any governor) for a state's jobs numbers.

Axelrod issued a memo Wednesday hitting many of the same topics as the campaign video, signaling a new push from the Obama re-election team to shine light on their rival's time as governor. For the past several weeks, Obama's campaign efforts have largely focused on Romney's tenure as chief executive of Bain Capital, the private equity firm.

A Romney campaign spokeswoman portrayed the latest attacks from Obama's team as "desperate" on Wednesday, saying they reflected a less-than-stellar jobs creation record on the president's part.

She continued, "If President Obama had even half the job creation record of Mitt Romney, then he would be running on it."

In the video released Thursday, the Massachusetts elected officials slam Romney as having failed the state on taxes and debt, saying his campaign promises went unmet.

"What we heard from Mitt Romney during the campaign was a 'no new taxes' pledge, but what he found very quickly during his term in office was that he couldn't deliver on any services without having sufficient resources, so he raised our taxes by raising our fees," Kaufman said.

Romney's record on taxes was similarly hit by fellow Republicans during the GOP primaries. A CNNMoney analysis of his record determined he cut select taxes while in office, and proposed some new tax cuts that didn't pass the legislature - like a 0.3 percentage point reduction in the 5.3% state income tax rate.

But he also had an obligation to balance the state's budget every year, and when he came into office he was facing a big deficit that he plugged using a mix of spending cuts and revenue increases, including the fee increases.

Carl Sciortino, a state legislator featured in the Obama video, said those fees hurt working families, who "were paying more under his administration."

"There are times when I watch Mitt Romney saying the exact same things now that he said here in Massachusetts in 2002 in a robotic way that is completely hollow. It didn't work here, so I'm not sure why he thinks it would work nationally," Sciortino says.