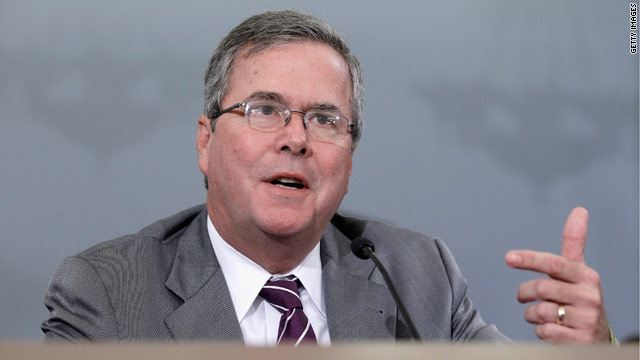 (CNN) - Former Florida Gov. Jeb Bush, often floated as a potential running mate for Mitt Romney, said he would favor slight tax increases in return for large cuts in spending - a compromise unpopular with many in his own party.

His comments came as Democratic lawmakers grilled Bush during his testimony before the House Budget Committee for a hearing titled, "Removing The Barriers To Free Enterprise And Economic Growth."

On Capitol Hill, Rep. Lloyd Doggett, D-Texas, presented a scenario to Bush, asking if he would accept a deficit reduction deal that included one dollar of new taxes for every ten dollars of spending cuts.

The same question was asked last summer at a GOP presidential debate. All eight candidates on stage, including Romney, said they would oppose such an agreement.

Bush, however, suggested he was open to the idea on Friday.

"Yeah, this will prove I am not running for anything," he said. "If you could bring to me a majority of people to say that we are going to have ten dollars of spending cuts for one dollar of revenue enhancement - put me in coach."

His comments come as Congress faces a so-called "fiscal cliff" at the end of the year, in which Republicans and Democrats will have to reach a deficit-reduction deal to raise the debt ceiling.

Given the nature of recent political rhetoric, lawmakers are expected to face another similar, highly-charged showdown as last summer when Congress barely reached a deal in time to avoid a government default.

While some bipartisan committees have recommended that both spending cuts and tax revenues need to place, some Republicans have stood firm against increasing taxes.

When pressed in the hearing, Bush said he also disagreed with popular pledges authored by Washington anti-tax heavyweight Grover Norquist and his group, Americans for Tax Reform.

"I ran for office three times. The pledge was presented to me three times. I never signed the pledge. I cut taxes every year I was governor," Bush said.

Romney signed the latest version of the pledge last year, along with several Republican presidential candidates at the time, in what was seen as a litmus test of fiscal conservative values.

Bush, however, countered the premise of the pledge on Friday.

"I don't believe you outsource your principles and convictions to people. I respect Grover's political involvement. He has it every right to do it, but I never signed any pledge," Bush said.

But Bush did line up with Romney on a few issues, notably the candidate's position on the so-called auto bailouts.

Bush, who endorsed Romney in late March, said he agreed with the presumptive nominee's controversial position that the auto industry should have gone through bankruptcy rather than receive federal loans.

"That's the form of capitalism when the government intervenes in a muscular kind of way and I don't believe that that's appropriate," Bush said.

"I have never been asked that either. I was out of office, so now you are asking," Bush said. "I think given the circumstances of the potential for a meltdown that would have been hard to recover some support was appropriate."

The congressman further quizzed Bush about his thoughts on Medicare, asking how he viewed the role of government in providing health care to seniors.

Bush said he "can see it happening" but only in a "dramatically different way."

"I am not sure that accepting Medicare as it was created in 1965 in 2012. I mean, that is the problem. We have this attitude that if you start something in mid 20th century it is appropriate to keep doing it the same way 50 years later," he said.

Bush has repeatedly shot down the idea of running as the GOP vice presidential nominee.