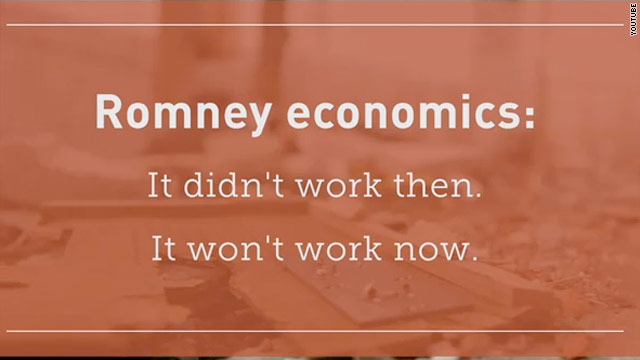 The video splices together clips from news interviews and debates of Romney's former GOP rivals, including those who now stand behind the presumptive GOP nominee, such as Sen. John McCain and major candidates from this cycle's Republican primary.

"As I understand it, his record was that he raised taxes by $730 million," McCain said in a 2008 presidential primary debate. "He called them fees. I'm sure the people that had to pay it-whether they called them bananas-they still had to pay $730 million extra."

McCain, who went on to become the party's nominee that year, is now a top surrogate for Romney on the campaign trail and boasts Romney's economic credentials.

With the tagline, "Romney economics. It didn't work then. It won't work now," the video specifically targets Romney's claims of job creation and record of lowering taxes as former Massachusetts governor.

And while Romney did eliminate some taxes in office, he had to raise revenue, as well, in order to curb a large budget deficit.

Other clips include quotes from Texas Gov. Rick Perry, former Utah Gov. Jon Huntsman and former House Speaker Newt Gingrich, all of whom ran as Romney's opponents in the primary.

"If Mitt Romney's an economic heavyweight, then we're in trouble," Santorum said, citing an often-used statistic that Massachusetts ranked 47th out of 50 in job creation while Romney was governor.

Politfact, a fact-checking organization, describes the statistic as half true, saying that while the state did rank 47th, Romney as governor was not entirely to blame for the situation.

The new web spot comes the same day as the Obama campaign said it would begin sending elected officials from Massachusetts to swing states in an effort to criticize their former governor's economic record.

States on their list for Friday include Florida, Pennsylvania, Iowa, North Carolina, Colorado and Nevada. On Monday, they will stop in Iowa and New Hampshire, with Ohio to follow.