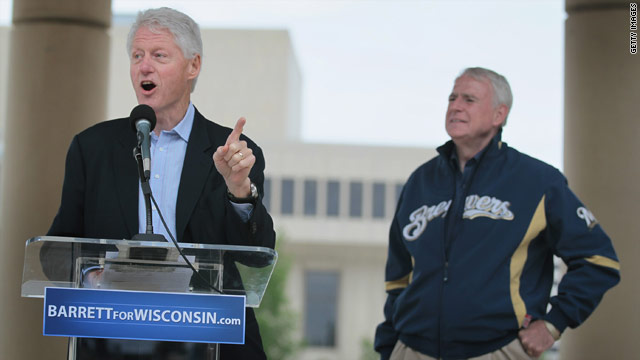 In an interview with CNN on Friday, Kleefisch was asked about former President Bill Clinton's stop in the state that day.

She said Democrats believe Tuesday's recall election is "a dry run for the presidential race."

Kleefisch then transitioned to Obama.

"What's more obvious is that the president himself - the current president - is not in town," she said. "And that, to me, speaks volumes, his absence."

Asked to elaborate, she went a bit further.

"I think what it says specifically is that the president doesn't want to be associated with a losing campaign, and Tom Barrett's campaign right now doesn't have a whole lot of facts to stand on."

Walker, Kleefisch and four state senators are on the recall ballot.

Walker and GOP allies in the state legislature voted in January 2011 to limit raises for public employees, except police and firefighters, to the rate of inflation. They also moved to bar unions from deducting dues from workers' paychecks.

Kleefisch spoke at an evening rally hosted by Americans for Prosperity and the Tea Party Express. She was not officially on the schedule for the event, but her aides said she had an unrelated event nearby.

Asked how she was feeling, given the fact that Wisconsin residents could vote her out of office in a few days, Kleefisch said she's "not afraid to lose."

"I don't think the governor or I is afraid to lose because we've done what has been right for our state, for our children, and for all the sons and daughters of Wisconsin."