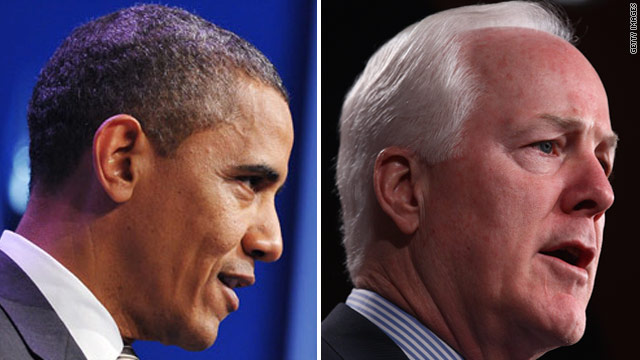 President, Republicans accuse each other of playing politics

No, that's what your party is doing, Sen. John Cornyn said, speaking for the GOP.

The Texas Republican said uncertainty over federal tax cuts - which would expire at the end of January without Congressional action - is harmful to families, businesses and the economy as a whole.

"This would be a body blow for our economy and it could easily push us back into a recession," Cornyn said. "Everyone knows that, including the president, who seems to prefer campaigning to governing, demonstrating a disappointing unwillingness to lead."

What the economy needs, the president said, are the measures included in the jobs bill he sent Congress in September, such as deficit reduction, elimination of wasteful spending, "job creating investments," and "asking the wealthiest Americans to pay a little more in taxes."

"Since then, Congress has only passed a few parts of that jobs bill, like a tax cut that's allowing working Americans to keep more of your paycheck every week," he said. "That was important. But Congress hasn't acted on enough of the other ideas in that bill that would make a difference and help create jobs right now."

"My message to Congress," he continued, "is get to work."

Obama called on Congress to work through his "to do list," which he has taken on the road this spring, most recently to a Minnesota factory on Friday, where his remarks closely mirrored portions of his weekly address.

In his weekly address, he called on Congress to approve funding for state and local governments, which is designed to prevent layoffs of teachers, firefighters, and police officers. He called on Congress to pass or extend a mortgage refinancing measure, an equal pay bill, and clean energy tax credits, plus "end the tax breaks for companies that ship jobs overseas, and use that money to cover moving expenses for companies that are bringing jobs back to America."

"Raising taxes is the last thing we should do amid the weakest economic recovery since World War II," he said in the Republican address. "Unfortunately, even if we avoid the full 'Taxmageddon' scenario, President Obama's health care law also contains a new surtax on investment that will take effect in 2013."

Cornyn called for tax reform with the objective to "lower the rates and broaden the base," but said "real presidential leadership" is required for that, something he doesn't see in Obama.

"We're eager to prevent the largest tax increase in American history, and we don't see any reason for delay," he said.

The urgency comes on at least two fronts. Each acknowledged the political realities of an election year, which can make consensus in Washington more difficult than usual. Both parties are also looking ahead to the January 1st tax increases - which Federal Reserve chairman Ben Bernanke has called "the fiscal cliff."

And what comes between now and then? Congress is out of town most of August and October, plus at half of November and December. There are the party conventions, plenty of campaigning, and those November elections.