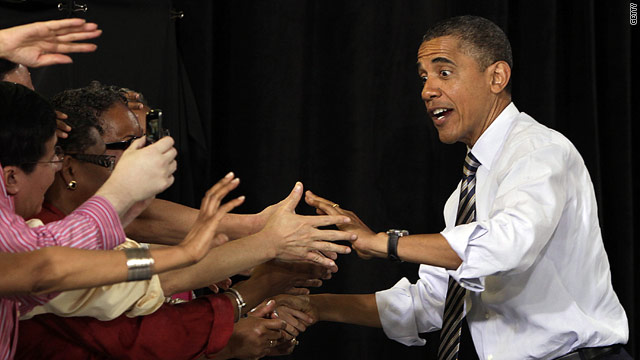 "Nearly all of the increased polarization since 1987 has occurred during the presidencies of George W. Bush and Barack Obama."

– "Republicans are most distinguished by their increasingly minimalist views about the role of government. Just 40% of Republicans say 'the government should take care of people who can’t take care of themselves,' down 18 points since 2007."

– "Democrats have become more secular. The proportion of Democrats saying they never doubt God’s existence has fallen 11 points over the past decade. Among white Democrats, the decline has been 17 points – from 85% in 2002 to 68% currently."

Gut Check Flashback: “The pundits like to slice and dice our country into red states and blue states, red states for Republicans, blue states for Democrats. But I've got news for them, too: we worship an awesome God in the blue states and we don't like federal agents poking around in our libraries in the red states.” – Illinois state legislator Barack Obama, candidate for U.S. Senate from Illinois, bursting onto the national stage with his keynote speech at John Kerry’s Democratic National Convention, July 27, 2004

TRAIL TRIVIA
(Answer below)
What photo series beat out the iconic Associated Press “tank man” photo for the Pulitzer Prize for Spot Photography in 1990?

In high school, the most popular kid is almost always a shoo-in to win the election for student council president and thus control the levers of student power. Sometimes this pattern seems to hold true as people get older and vote for their congressmen and senators – even presidents.

Popularity is a strong characteristic for any presidential hopeful, but five months before the November Election a new CNN/ORC International poll shows that neither candidate has an edge when it comes to this trait.

President Barack Obama has a 53% favorable rating, while Mitt Romney registers in at 51%, according to the poll of registered voters released this morning. Obama’s unfavorable rating is 46%, Romney’s is 41%.

The two candidates’ favorable and unfavorable ratings are nearly identical, and just as in high school, they each draw support from different groups and, in some cases, the same people.

As you look down the calendar towards Election Day, keep a sharp ear to what each of the candidates are saying and where their messages are being directed. More than likely you will be able to match it up against the numbers above.

Leading CNNPolitics: What does Obama's absence say about Wisconsin recall vote?
Fueled by the power of organized labor, the passion of the tea party and millions in outside money, it is politics gone wild in Wisconsin. The recall race to oust Republican Gov. Scott Walker has pretty much seen it all - except for President Barack Obama. – Candy Crowley

Leading Politico: Romney's top political adviser: Romney
Mitt Romney, well into his second, more successful presidential run, still has no Rove-like figure — an all-seeing adviser engineering the entire, increasingly sprawling, political apparatus. But aides and insiders say there is someone very much in charge — and that would be, for better or worse, Mitt Romney. – Maggie Haberman

Leading New York Times: With Boos and Solyndra, Romney Plays Offense
At Mitt Romney’s Boston headquarters, there was pure glee. Word had just leaked that David Axelrod, the chief strategist for President Obama’s campaign, would arrive the next morning to attack Mr. Romney on the steps of the State House, a half-mile away. The campaign burst into full heckling mode — producing “Go Back to Chicago!” signs, rounding up a bubble machine and finding a spacesuit costume (“Astronomical debt!”). – Michael D. Shear and Ashley Parker

- Picking Rubio would be an insult to Hispanics, says Axelrod -
SENIOR ADVISER DAVID AXELROD IN AN INTERVIEW WITH UNIVISION: “I think it would be an insult to the Hispanic community to choose Senator Rubio if he thinks that that is somehow - if Governor Romney thinks that's sort of a get out of jail free card for all of the things and the positions that he's taken… So I think if people vote their self-interest there's no question, no matter who's on the ticket with Governor Romney, that the choice is clearly to vote for President Obama.”

- Walker: Wisconsin will be better ‘the sooner we can get past tomorrow…’ -
WISCONSIN GOV. SCOTT WALKER IN A CAMPAIGN SPEECH IN FITCHBURG, WISCONSIN: “What they’re (Wisconsin voters) concerned about is that somehow instead of moving forward as we've done in the past year and a half, the state might, in some way, go backwards. … We want to move the state forward, and the sooner we can get past tomorrow's election, the better off we're going be.”

- Obama connects equal pay for women with ‘make-or-break moment for middle class’ -
PRESIDENT BARACK OBAMA PRESSES CONGRESS ON A CONFERENCE CALL: “At a time when we're in a make-or-break moment for the middle class, Congress has to step up and do its job. If Congress passes the Paycheck Fairness Act, women are going to have access to more tools to claim equal pay for equal work. If they don't, if Congress doesn’t act, then women are still going to have difficulty enforcing and pressing for this basic principle.”

On June 5, 1989, a man wearing a white dress shirt stared down a column of tanks during China’s Tiananmen Square protests. The image, shot by AP photographer Jeff Widener, has become the iconic moment of the protests and to this day it as seen as a symbol of civil disobedience.

Widener’s photo, however, did not win the Pulitzer Prize for Spot Photograph in 1990. Instead, the photo staff of The Tribune in Oakland, California won “for photographs of devastation caused by the Bay Area earthquake of October 17, 1989.” The 6.9 magnitude Loma Prieta earthquake, as it came to be known, rocked the Bay Area and killed 62 people, with almost 4,000 people were injured.

Even though the adage states that “no one remembers second place,” this is one instance that flips common knowledge on its head. Widener’s photo has been included on countless lists of iconic photographs of the twentieth century, leading some to even label is the most iconic of the century.