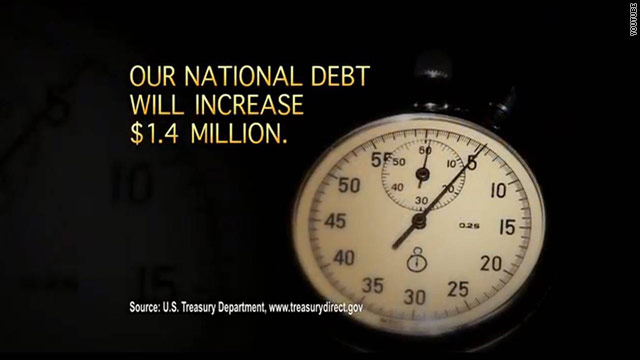 Washington (CNN) - An independent group co-founded by Karl Rove says it's going up with a new TV commercial that claims that President Barack Obama has failed to address the nation's massive debt.

Crossroads GPS said Tuesday it will spend $7 million to run the ad, titled "Stopwatch," in 10 battleground states over the next two weeks.

The 30-second spot starts with a shot of a stopwatch ticking, with the ad's narrator saying "why isn't the economy stronger. In the seconds it takes to watch this our national debt will increase $1.4 million."

The commercial then uses a clip of presidential candidate Obama on the campaign trail in October 2008 saying "we can't mortgage our children's future on a mountain of debt."

The ad continues with the narrator saying "now he's adding $4 billion in debt every day; borrowing from China for his spending; every second, growing our debt faster than our economy. Tell Obama 'stop the spending'. Support the New Majority Agenda at New Majority Agenda dot org."

Crossroads GPS is the sister organization to American Crossroads, the independent super PAC that backs GOP causes and candidates.

A top Democrat was quick to react to the new Crossroads ad.

"In rushing to defend his candidate, Karl Rove has highlighted one of Governor Romney's key weaknesses. As CEO, Romney often made millions by loading up companies with unsustainable debt to pay himself fees. As Governor, Romney increased state debt by $2.6 billion – leaving the state with the highest debt per capita in the country," Bill Burton, the co-founder of Priorities USA, a pro-Obama super PAC, told CNN.

"Now Romney is proposing to add $3.4 trillion to our debt with new tax cuts for the very wealthiest Americans. In business and government, Romney has always been for more debt at the expense of the middle class, especially when it stood to make the wealthy, wealthier," added Burton, a former deputy press secretary in the Obama White House.