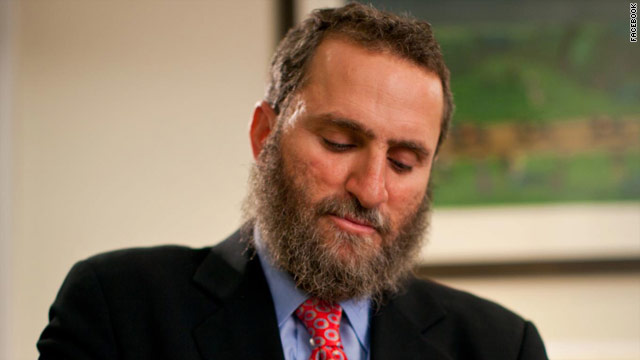 Washington (CNN) - If Rabbi Shmuley Boteach wins a congressional race in New Jersey's 9th district in November he will become the first rabbi to serve in Congress. And while he moved a step closer by winning the district's Republican primary on Tuesday night, Boteach says he is not hung up on being first.

"I think it would be a beautiful thing for the Jewish community," Boteach, a Republican, said about a rabbi serving in Congress. "I am kind of wondering why we didn't have one before. And if it is me, I would be very pleased. But if it is someone else, I would be pleased… but maybe not as pleased."

Though Boteach is seeking office in a newly configured district, it is one that was last represented by a Republican in 1983. That may be the reason that Boteach is using more moderate language to talk about Democrats and, in particular, President Barack Obama.

"I want to run a very positive campaign. I reject the hyper partisanship," Boteach said in a phone conversation with CNN. "Not withstanding party affiliation, you give credit where credit is due and you offer criticism when it is warranted."

He continued by saying that the killing of Osama bin Laden was a good example of a place to credit Obama.

Additionally, Boteach criticized the Republican establishment, stating that "Republicans are getting fixated with abortion, contraception and gay marriage."

When he announced his candidacy, Boteach said he would advocate a flat tax and push a course in public schools that "focuses on the values that are at the heart of the republic." He also said he would make the cost of marriage counseling tax deductible as part of an effort to reduce divorce rates.

Rep. Bill Pascrell (D-N.J.) will face off against Boteach in November after the eight-term congressman secured the Democratic nomination Tuesday night. Pascrell defeated Rep. Steve Rothman, the current representative from the district. Because of redistricting, both congressmen had to run against each other.

In a message to supporters following his nomination, Boteach attempted to contrast himself with Pascrell and described his candidacy as "values-based."

"I look forward to running a serious ideas-based campaign, and offer people of the 9th District a clear choice between a lifetime, career-politician seeking his 9th term in office and a values-based candidacy that rejects the old, ineffective way of doing things," Boteach wrote.

On Wednesday, Boteach continued to draw a contrast with his opponent over the length of time they have been in politics.

"I am not desperate to win. I have a pretty busy life," Boteach said.

Politics is, in fact, a new venture for Boteach, who is also known as the bestselling author of "Kosher Sex: A Recipe for Passion and Intimacy" and one-time spiritual adviser to Michael Jackson. In 2009, he published a book that featured a number of interviews with the late pop-star. Additionally, Boteach starred on the TLC reality show "Shalom in the Home" in 2006.

The rabbi occasionally refers to himself as "America's Rabbi."

Ordained by the Chabad-Lubavitch movement in Brooklyn, Boteach first gained attention as the rabbi at Oxford University in England.

New Jersey's 9th district includes portions of Bergen, Hudson and Passaic counties in the northern part of the state. Currently the 9th district is represented by a Democrat, Rep. Steven Rothman, who is serving his eighth term in the House, but lost his party's nomination on Tuesday.

- CNN's Kevin Liptak and Adam Levy contributed to this report.