"My first choice had always been my father. I campaigned for him when I was 11-years-old. He's still my first pick, but now that the nominating process is over, tonight I'm happy to announce that I'm going to be supporting Gov. Mitt Romney," Rand Paul said on Fox News.
END_OF_DOCUMENT_TOKEN_TO_BE_REPLACED

(CNN) - Following his survival of a Wisconsin recall effort, Republican Gov. Scott Walker on Thursday pushed back against the idea of being tapped as a potential running mate for Mitt Romney.

Political observers point out that not only is Walker a rising star in the GOP, but having his name on the ticket could further push the blue state of Wisconsin into the Republican column this November.
END_OF_DOCUMENT_TOKEN_TO_BE_REPLACED

Las Vegas (CNN) – President Barack Obama is trying to use social media to push his proposal to prevent interest rates on student loans from doubling at the end of the month.

While speaking to a crowd of 2,500 on the campus of University of Nevada-Las Vegas, he urged students Thursday to put pressure on Congress by writing on members' Facebook walls, and tweeting with the hashtag #dontdoublemy rate.

(CNN) - In an interview Thursday, former Pennsylvania Gov. Ed Rendell, a Democrat, predicted the 2012 presidential race would be competitive and joked that the Obama campaign lacked a sense of humor. 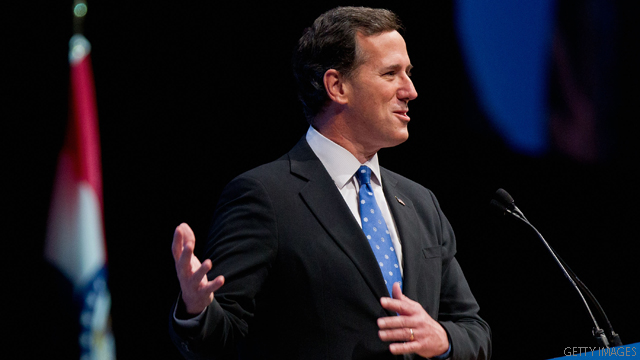 Santorum to lay out his political future

Washington (CNN) - Two months after he suspended his presidential campaign, former Pennsylvania Sen. Rick Santorum on Friday will lay out his future plans as he looks for ways to make sure his voice is heard and his influence is felt as a leader of the conservative wing of the Republican Party.

According to two sources with knowledge of his plans, Santorum is expected to announce he is forming a political committee - a so-called 501 (c)(4) advocacy group - that would give him a vehicle to push issues important to him and a platform to stay engaged.
END_OF_DOCUMENT_TOKEN_TO_BE_REPLACED

In an interview on CNN's "The Situation Room," Fehrnstrom was asked about remarks Clinton made last week when he called Romney's business record "sterling." The former president later refined his praise.
END_OF_DOCUMENT_TOKEN_TO_BE_REPLACED

But in his seventh congressional hearing on the Bureau of Alcohol, Tobacco, Firearms and Explosives' Operation Fast and Furious, Holder left largely unscathed after standing by previous claims he knew nothing about the flawed tactics until early last year.

QUOTE OF THE DAY: “She has her father’s energy, and her mom’s brains and character,” – Bill Clinton talking about his daughter Chelsea to CNN’s Wolf Blitzer (Watch the full interview on CNN’s the Situation Room at 5 p.m. ET)

BREAKING: FOLLOW THE MONEY… MITT ROMNEY TOPS BARACK OBAMA IN FUND-RAISING FOR THE FIRST TIME, despite the Obama campaign’s high profile fund-raising efforts with George Clooney following his much talked about May 9th interview with ABC News’ Robin Roberts where he voiced support for same sex marriage – a stance that many pundits proclaimed would help Obama with fund-raising.

END_OF_DOCUMENT_TOKEN_TO_BE_REPLACED

David Axelrod attributed Romney's May haul of $77 million to the end of the Republican primary season, allowing the presumptive GOP nominee to shore up cash that was previously going to a crowded field of contenders.
END_OF_DOCUMENT_TOKEN_TO_BE_REPLACED

(CNN) - Democrats called attention to Mitt Romney's personal financial arrangements on Thursday, suggesting on a conference call with reporters that he was being dishonest with the characterization of his "blind trust," and also claimed he may not be fully retired from the private equity company he founded.

"It's understandable, given the many years that he was involved with Bain and the pride he takes in his service there, that he may have some sort of an arrangement by which Bain believes that he is continuing to render valuable service in some way to them," Bob Bauer, the attorney for President Barack Obama's reelection campaign, said.
END_OF_DOCUMENT_TOKEN_TO_BE_REPLACED