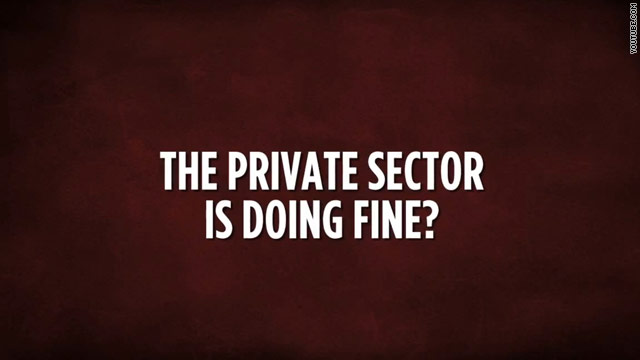 GOP presidential candidate Mitt Romney asked at a campaign event in Iowa if the president was "really that out of touch."

In a Friday press briefing, Obama provided the fodder for Republicans, saying, "we've created 4.3 million jobs over the last two - 27 months. Over 800,000 just this year alone. The private sector is doing fine." Local governments and infrastructure - the public sector - are stuttering, he continued, urging Congress to consider "how do we help state and local governments and how do we help the construction industry." At a photo-op later in the day, the President sought to clarify his comments saying "it is absolutely clear that the economy is not doing fine."

Gov. Chris Christie of New Jersey shot back in his appearance at CPAC that Obama "saddled us with all of these federal rules and regulations that don't allow governors to have the freedom to do what we really want."

"He has the audacity to stand up this morning and say that it's the nation's governors and mayors who are driving our economy down by not hiring enough people for government work," he said.

A few hours after the press conference, Obama's remarks were rolled into a Republican National Committee web video, which sandwiched it between news clippings.

"How can President Obama fix our economy if he doesn't understand what's broken," the video asked.

RNC chairman Reince Priebus said in a conference call with reporters that "his announcement that the private sector is doing 'fine' says to me that he's just completely out of touch with the 23 million struggling Americans, and doesn't have a clue how to create jobs or turn the economy around."

The president, Priebus said, "has to be living in an alternate universe."