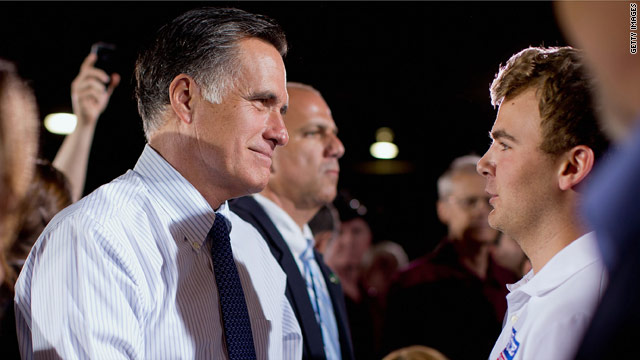 Romney on Obama: 'Is he really that out of touch?'

Salt Lake City, Utah (CNN) - Mitt Romney berated Barack Obama as "so far from reality" after the president said the private sector is "doing fine" during a press conference Friday.

"He said the private sector is doing fine. Is he really that out of touch? I think he is defining what it means to be detached and out of touch with the American people," Romney said in Council Bluffs, Iowa after a roundtable discussion with farmers.

In his opening remarks in the White House briefing room, Obama addressed the economic crisis in Europe and offered his assessment of the state of the economy in the United States during a question and answer session with reporters.

"The truth of the matter is that, as I said, we created 4.3 million jobs over the last two, 27 months, over 800,000 just this year alone. The private sector's doing fine," Obama said. "Where we're seeing weaknesses in our economy have to do with state and local government, oftentimes cuts initiated by, you know, governors or mayors who are not getting the kind of help that they have in the past from the federal government and who don't have the same flexibility as the federal government in dealing with fewer revenues coming in."

The Republican presidential candidate criticized his 2012 competitor for "pushing aside the private sector" and instead wants to add more government jobs. He cited the recent gubernatorial recall vote in Wisconsin as a sign voters want the opposite.

Romney said of Obama, "he wants another stimulus, he wants to hire more government workers. He says we need more fireman, more policeman, more teachers. Did he not get the message of Wisconsin? The American people did. It's time for us to cut back on government and help the American people."

During a conference call with reporters Obama's re-election team defended the president's remark.

"The president has always made clear that we need to do more than just recover from the recession because the fact is even before the economic crisis it was getting harder for middle class families to send their kids to college and make ends meet. And that's why he's focused every day on creating jobs now and restoring economic security to the middle class," Obama press secretary Ben LaBolt said.

Speaking in Iowa, Romney called his characterization that the private sector is doing fine will "go down in history as an extraordinary miscalculation and misunderstanding by a president who's out of touch."

Romney poked fun at the president, referring to a to-do list Obama said he keeps in his desk in the Oval Office.

"I got a copy here of his to do list from his desk. You see I was able to sneak that out and there were a few things that are missing. Missing is lead a real recovery. Missing is reduce the deficit. Missing is save Medicare and social security. Missing is help for small business," Romney said.

"And I won't have to have a long to-do list in my drawer at the White House. My to do list is written on my heart and the first three entries are these: jobs, jobs and jobs. I'm going to go to work to get America working again."