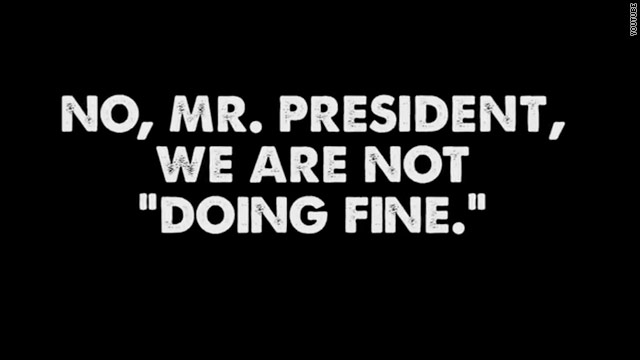 (CNN) - Mitt Romney's campaign released a new Web video Sunday, forging ahead in its attacks over the president's assertion last week that the private sector was "doing fine."

The spot features President Barack Obama's remarks, followed by a series of dramatic, black-and-white interviews with laid-off Americans talking about their economic struggles.

"I had to file my own personal bankruptcy and had to close my business," another man says.

Obama made the remarks Friday during a press conference, arguing the private sector was doing better than the public sector.

"The truth of the matter is that, as I said, we created 4.3 million jobs over the last two, 27 months, over 800,000 just this year alone. The private sector's doing fine," Obama said. "Where we're seeing weaknesses in our economy (has) to do with state and local government, oftentimes cuts initiated by, you know, governors or mayors who are not getting the kind of help that they have in the past from the federal government and who don't have the same flexibility as the federal government in dealing with fewer revenues coming in."

However, the Romney video only displays the lines: "The private sector's doing fine" and "Where we're seeing weaknesses in our economy (has) to do with state and local government." The former line is repeated four times in the spot.

Later Friday, Obama walked back his assertion, saying the "economy is not doing fine." His campaign has insisted the president's words were being misread, and he was merely talking in relative terms.
Romney responded to the remarks that same day, saying the president wants to stimulate the public sector over the private sector.

"(Obama) wants another stimulus; he wants to hire more government workers. He says we need more firemen, more policemen, more teachers," Romney said at a press conference in Utah. "Did he not get the message of Wisconsin? The American people did. It's time for us to cut back on government and help the American people."

In what has since become a spiraling fight between the two campaigns, the Obama team quickly pounced on those statements and released a web video Saturday attacking Romney as being against firefighters, police and teachers.

On CNN's "State of the Union" on Sunday, the president's senior campaign adviser, David Axelrod, argued that Romney and Republicans were "more eager to have a debate over an out-of-context clause" than the "substance of what (Obama) says."