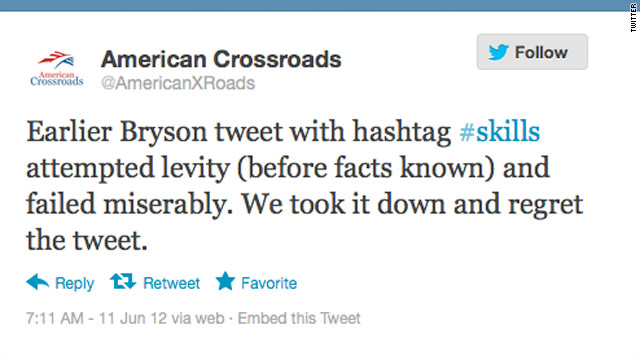 (CNN) – American Crossroads, the conservative super PAC co-founded by Karl Rove, apologized on Twitter Monday after using the social messaging site to suggest Commerce Secretary John Bryson was intoxicated when he was involved in a weekend traffic accident outside Los Angeles.

Originally the group tweeted, "How does @CommerceSec have 3 car crashes in 5 minutes and alcohol NOT be involved? #Skills."

The tweet does not currently appear on the group's page, but a screengrab captured by ABC News indicates the message was originally posted at 8:02 a.m. Monday.

A follow-up message posted at 9:11 a.m. reads: "Earlier Bryson tweet with hashtag #skills attempted levity (before facts known) and failed miserably. We took it down and regret the tweet."

Bryson was issued a citation at an area hospital after sustaining minor injuries in the Saturday accidents. Authorities must still decide whether to formally file any charges.

A preliminary alcohol screening of Bryson was negative, a spokesman for the San Gabriel, California, police department said, and results from a blood alcohol test were pending.

The Commerce Department indicated Monday the secretary had suffered a seizure.

"Secretary Bryson was involved in a traffic accident in Los Angeles over the weekend," said a statement by Commerce Director of Public Affairs Jennifer Friedman. "He suffered a seizure. He was taken to the hospital for examination and remained overnight for observation. He was released and has returned to Washington. The investigation is ongoing."

According to a Commerce official, Bryson was on personal time with no security detail when the accidents occurred and was driving his own vehicle. The official, who spoke to CNN on condition of not being identified, said Bryson was given medication to treat the seizure.