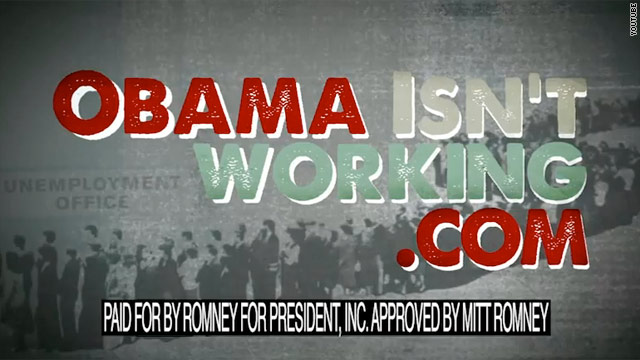 (CNN) – The dust up Friday over President Barack Obama's remark on the private sector showed little sign of quieting Monday, as his rival's campaign put renewed effort in portraying the Democratic incumbent as out of touch with American workers.

A web video from Mitt Romney's presidential campaign - its second in two days - juxtaposed Obama's remark that "the private sector's doing fine" with news bulletins from earlier this month announcing May jobs numbers. The report showed 69,000 jobs were created and the unemployment rate ticked up to 8.2%.

In full context, Obama said during his Friday press conference that 4.3 million jobs had been added in the private sector in the last 27 months.

"The private sector's doing fine," Obama said. "Where we're seeing weaknesses in our economy have to do with state and local government, oftentimes cuts initiated by, you know, governors or mayors who are not getting the kind of help that they have in the past from the federal government and who don't have the same flexibility as the federal government in dealing with fewer revenues coming in."

Obama later clarified his remarks, telling cameras in the Oval Office "it is absolutely clear that the economy is not doing fine."

The struggling economy, he clarified, is "why I had the press conference."

"Only a president that presides over forty months of unemployment over 8 percent would think that the last jobs report is 'doing fine.' These comments show that President Obama is completely out of touch with the middle class," Romney campaign spokeswoman Amanda Henneberg wrote in a statement.

On CNN Monday, Obama campaign Deputy Campaign Manager Stephanie Cutter said her team was ready for the "out of touch" debate.

"We'd be happy to have a debate about who is out of touch with middle-class Americans with Mitt Romney," Cutter said on "Starting Point with Soledad O'Brien."

She continued, "I think that the American people understand that the president is trying to move this country forward. He's trying to strengthen our economy. He's the only one out there with solutions of how to do that. Mitt Romney’s solution of how to strengthen the economy? Fire more people. He believes that if we fire more teachers, more firefighters, more policemen, we're actually going too grow this economy."

Obama's campaign was similarly focused on jobs Monday, releasing a web video of their own highlighting Romney's comments Friday on public sector jobs. The president's re-election effort released a similar video Saturday, highlighting their GOP rival's remarks at a campaign event in Iowa.

The Obama campaign video claims Romney made cuts to public sector workers while governor of Massachusetts, and utilizes local officials who served with him to discredit his record.

Rob Dolan, mayor of Melrose, Massachusetts, says in the spot: "During Gov. Romney's tenure, local government was cut dramatically. We lost police, fire fighters, teachers at rapid rates. People that directly impact the lives of every citizen. Our cities were not as clean, less safe, larger class sizes."

"The man did not care. He didn't care what was going on in our communities," John Barrett, former mayor of North Adams, Massachusetts, says.

Obama's campaign recently began using former elected colleagues of Romney's to highlight what they claim is a failed record in Massachusetts. Romney's campaign points to a low unemployment rate in Massachusetts and reduced deficits as evidence of a strong fiscal record.