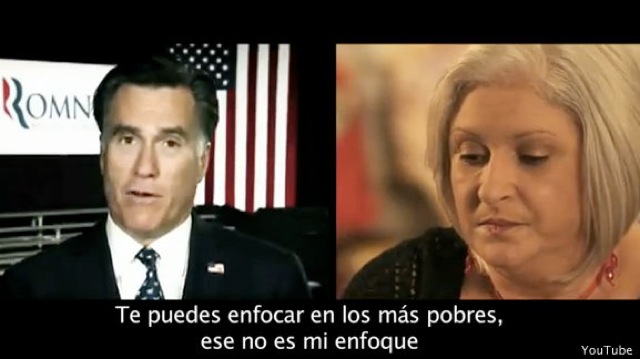 The ad features clips of some of Romney's notable gaffes on the campaign trail, largely those critics used to highlight his wealth and paint the presumptive GOP presidential nominee as out of touch.

"You can focus on the very poor, that's not my focus," Romney says in the first part of spot, a comment he made in a CNN interview the day after he won Florida's primary earlier this year.

Opponents quickly pounced on the remark at the time, but Romney's team argued the quote was repeatedly used out of context.

"I said I'm not concerned about the very poor that have the safety net, but if it has holes in it, I will repair them," Romney said later in the interview, adding that his campaign is focused on "middle income Americans" that don't have a government "safety net."

In the Priorities ad, a woman says in response to Romney's quote (in Spanish): "What about us? He's not thinking about us."

Another man adds: "It's easy for him to say that since he doesn't have the same necessities as us."

Using text on screen, the spot also takes a shot at Romney's private equity career, a tactic Democrats have adopted as a primary line of attack against the candidate.

"Mitt Romney made millions of dollars leaving thousands of people without work," the screen reads.

The commercial then resurfaces an old joke Romney, a multi-millionaire, made last June while speaking with unemployed people at a Florida campaign stop.

"I'll also tell my story: I am also unemployed," he said to laughter in the small crowd, adding that he's got his eye on a certain job.

After being asked about the comment later in the day, Romney said he was only poking fun at himself.

"I'll always make light of myself, and self deprecating humor is part of who I am," Romney told reporters.

In the commercial, a man responds to the clip, saying unemployment is no laughing matter.

"When you are really out of work. you are worried, you don't want to laugh or make fun of anybody," he says.

The Latina voter in the commercial adds: "I feel that he should not be the person that leads this country."

The ad ends with text displayed on the screen: "Mitt Romney: His words say it all."

Totaling $4 million, the ad will begin running Monday in the toss-up states of Colorado, Nevada and Florida. While this particular version will air in Florida, similar lines of attack are used in the TV spots to run in Colorado and Nevada.

"This ad is part of a broader effort to ensure Latino voters know the stakes in this election and who has been on the side of Latino Families and who will continue to stand with them in the coming years," said SEIU National Political Director Brandon Davis.

The same joint enterprise between Priorities and SEIU has previously targeted Romney using radio ads in Spanish, in which they painted the former Massachusetts governor as a candidate with "two faces" and someone who panders to the Latino community while favoring policies such as "self-deportation."

Romney's campaign responded to those ads, calling them a "dishonest smear" against the candidate.

"Hispanics, like all Floridians, are supporting Mitt Romney because they know he has a proven record as a conservative businessman, and is the best person to rebuild the economy that President Obama has spent three and half years destroying," Romney adviser Albert Martinez told CNN at the time.