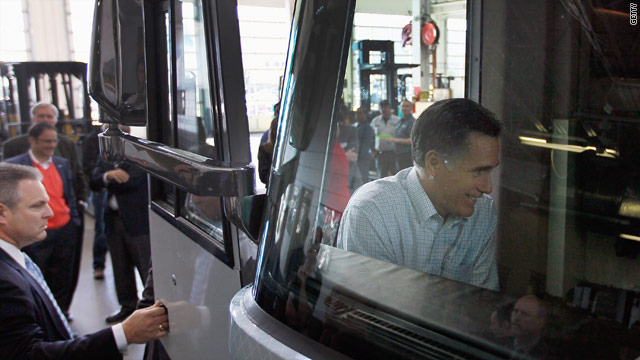 Romney to bus a move

(CNN) – Mitt Romney's campaign said Monday the candidate would embark on a bus tour in June, beginning in the state where he announced his presidential campaign.

Romney will begin the tour on June 15 in New Hampshire, and travel to Pennsylvania, Ohio, Wisconsin, Iowa and Michigan. In total the bus tour will last five days.

"For three and a half years, President Obama has paid little attention to the everyday concerns of the American people," Romney said in a statement. "President Obama has offered no hope for the future, and he has left American families to bear the burden of his failed policies. Too many American families have experienced a lost job, faced foreclosure, or been forced to spend their kids' college savings just to make ends meet."

Romney's tour, which the campaign said would include small towns, will highlight concerns of working Americans.

"In America's small towns, you don't find despair - you find boundless optimism. We know we can make America better, and that is why I am running for president," Romney said.

In June 2011, Romney formally announced he was running for the GOP presidential nomination at a farm in Stratham, New Hampshire. He'll make 10:30 a.m. ET remarks at the same property, Scamman Farm, which is owned by former New Hampshire House Speaker Doug Scamman and his wife, former Rep. Stella Scamman.

He campaigned heavily in the state, eventually winning the first-in-the-nation primary in January. New Hampshire, along with Iowa, is classified a "toss up" on CNN's electoral map.

Pennsylvania, Wisconsin and Michigan are considered "leaning Obama" on the CNN map.

CNN's Kevin Liptak and Shawna Shepherd contributed to this report.