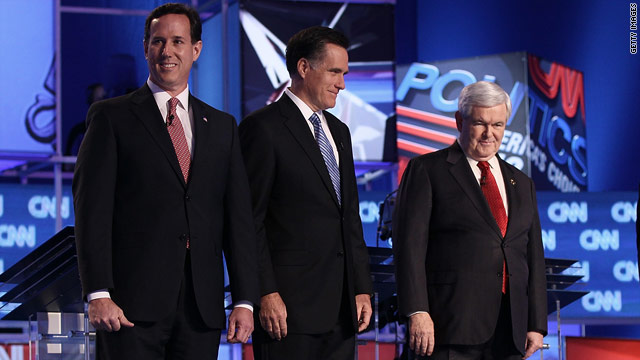 Where are the unity events?

Washington (CNN) - A week after Mitt Romney pulled out of the Republican presidential race in February 2008, he stood next to John McCain, with the national press corps capturing the moment, and said: "I'm officially endorsing his candidacy."

In April 2008, about seven weeks after Mike Huckabee ended his run for the Republican presidential nomination, he and McCain campaigned together. Huckabee was quoted as saying: "The main thing is getting Senator McCain elected."

When Hillary Clinton brought her run for the Democratic nomination to a close in June of 2008, she immediately endorsed Barack Obama with cable news networks carrying the event live as she told the crowd of supporters, "I ask all of you to join me in working as hard for Barack Obama as you have for me." Three weeks later, the two former opponents traveled together on the same plane to campaign together in aptly-named Unity, New Hampshire.

Fast forward to 2012. There hasn't been that kind of public embrace between Romney and his major competitors.

Rick Santorum and Romney held a private meeting just over three weeks after the former Pennsylvania senator suspended his campaign - no cameras were there, no image of the meeting was seen. Santorum issued a late night e-mail announcement of his endorsement of Romney three days later.

"We both agree that President Obama must be defeated. The task will not be easy. It will require all hands on deck if our nominee is to be victorious. Governor Romney will be that nominee and he has my endorsement and support to win this the most critical election of our lifetime," Santorum wrote.

Asked on Sunday if he has plans to appear soon with Romney, Santorum said: "We've certainly been in conversation with the Romney campaign and have offered to be available where they think I can be helpful."

Aides to Santorum, however, told CNN a joint Romney-Santorum public event is so far not in the works. The Romney campaign has given Santorum's staff a list of more than a dozen cities where they believe the former Pennsylvania senator could boost the effort by stumping on behalf of the presumptive Republican nominee, according to John Brabender, former Santorum senior strategist. Santorum and his staff have indicated to Romney's camp they will do what they can to help the ticket and are working through his schedule to firm up dates and locations.

"There is universal support for realizing we have to engage everyone to make sure Obama is defeated in November," Brabender said.

The campaign calendar is one reason there has not been a rush of one-time foes embracing each other in public events this year versus 2008.

"The primary season was a heck [of a lot] longer," Brabender said as compared to the relative brevity of last time. The lengthened campaign also brought a longer period of candidates attacking each other.

Brabender dismissed the importance of the two foes, who exchanged harsh words towards the end of the primary season, not embracing each other publicly.

"People are going to read into everything," he said. "People are finding things and wondering. Often times they mean nothing."

Because they have held a meeting and Santorum has given his endorsement, "there is already the assumption the party is unified," Brabender said. "I'm not sure if there needs to be something symbolic."

He later told CNN's "State of the Union": "I believe that Mitt Romney will be a dramatically better president for the United States than Barack Obama. I believe that he has earned the right to represent the Republican Party, and he's earned it the hard way. He has fought his way to the nomination. Nobody gave him an inch."

Gingrich stumped for Romney two weeks later at the Georgia Republican convention. Monday night, for the second time in two weeks, he appeared alongside Romney at a private fund-raiser. Still, the two men have not held a public event together since Gingrich pulled out.

"Newt is going to help the Romney campaign defeat President Obama in any way he can," Gingrich spokesman R.C. Hammond told CNN. Hammond pointed out right now the focus of the campaigns is raising money and that is how Gingrich can probably be most helpful to Romney.

There was a more traditional embrace of one-time foes when former Minnesota Gov. Tim Pawlenty endorsed Romney on Sept 12 of last year - a month after he pulled out. Pawlenty was appointed a national co-chair of Romney's campaign, and the two campaigned together that day in South Carolina.
Texas Gov. Rick Perry left the race back in February, endorsing Gingrich. Following Gingrich's own exit, Perry endorsed Romney but there has not yet been a public show of affection between the two.