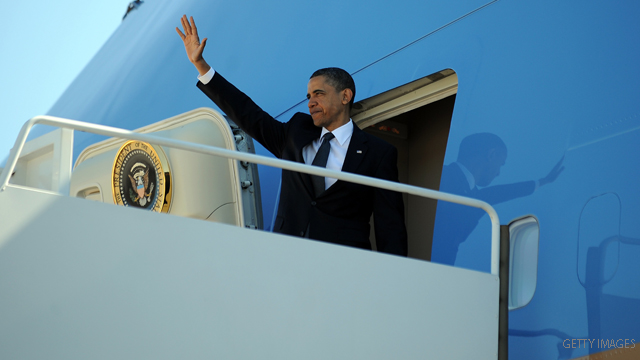 BREAKING: The Department of Justice drops all charges in the John Edwards case.

REACTION, in a statement from attorney Abbe Lowell: “The novel theory of campaign law violations charged by the Justice Department is not a crime. It should be addressed, if at all, by the Federal Election Commission.” … “We are very glad that, after living under this cloud for over three years, John and his family can have their lives back and enjoy the peace they deserve.”

TRAIL TRIVIA
(Answer below)
Who was the most recent speaker of the U.S. House to become vice president?

A question we shall ask from now until November is this: Are you better off now than you were four years ago? Just in the past week, we have explored the answers that Bill Clinton and the American family might give.

Now we want to look at how the view of an American abroad has changed in the past four years. Remember that before all the Republican-led debates on whether Barack Obama believed in American exceptionalism, Obama burst onto the world stage proclaiming a new dawn for American diplomacy.

The freshman senator from Illinois pulled a crowd of around 200,000 in the streets of Berlin as he announced, “Partnership and cooperation among nations is not a choice; it is the one way, the only way, to protect our common security and advance our common humanity. …The walls between the countries with the most and those with the least cannot stand.”

That pitch not only helped to rally the international community to his campaign, it helped him win the Nobel Peace Prize nine months into his presidency. So, how is that hope and change going for global attitudes toward America?

“Some of bloom has come off the rose, but not much,” Andrew Kohut, president of the Pew Research Center, told Gut Check in an interview today. Global opinion of America “is marketedly better than the last decade” Kohut said.

It’s interesting to note that despite global economic woes, 80% of Europeans surveyed in Pew’s Global Attitudes Project have confidence in Obama. “What we have not seen is the United States being blamed,” for the current economic climate Kohut said. “People blame local banks, organizations and their own governments."

On the flip side, majorities in major European allies, such as Germany, Britain and France, that give Obama high confidence marks, now see China, not America, as the world economic leader.

Leading CNNPolitics: Dimon: 'I can't publicly defend the trade'
JPMorgan Chase Chief Executive Jamie Dimon told senators on Capitol Hill on Wednesday that he cannot defend the trades that led to the bank's massive multibillion loss. "The way it was contrived between January to March, it changed into something I cannot publicly defend," Dimon told members of the Senate Banking Committee during a two-hour hearing.

Leading Drudge: Romney Leaps To Lead In Wisc
Mitt Romney now leads President Obama for the first time in Wisconsin where the president's support has fallen to its lowest level to date.

Leading HuffPo: Obama Gambles To Ask For More Time To Fix The Economy
So far, President Barack Obama has not been able to convince most Americans that they are better off than they were four years ago. His next step may be to try to convince them that they would be worse off under his Republican rival, Mitt Romney. – Andy Sullivan and Caren Bohan

Leading Politico: Wall Street's vote: Romney by a landslide
For three years, Wall Street’s been telling the world how much it can’t stand President Barack Obama. Now, thanks to campaign finance filings, it’s possible to put a price tag on just how much: Mitt Romney's presidential campaign and the super PAC supporting it are outraising Obama among financial-sector donors $37.1 million to $4.8 million. – Abby Phillip and Kenneth P. Vogel

Leading The New York Times: 2 Campaigns Chasing Funds at Frantic Pace
With the competitive realities of the deregulated campaign finance system, President Obama and Mitt Romney need to devote much of their time to raising money to fuel their campaigns. – Ashley Parker and Helene Cooper

- Romney outlines how first 100 days will help business -
MITT ROMNEY AT A MEETING OF THE BUSINESS ROUNDTABLE IN WASHINGTON: “I will in my first 100 days take action to eliminate government programs, to send a lot of government programs back to states where I’ll limit the rate of growth and inflation, and to cut back the number of federal employees through attrition. And by the way, to link the pay of government workers with the pay that exists in the private sector. And those things save about $500 billion dollars a year by my fourth year in office, if I am lucky enough to be elected and get us to a balanced budget within eight to 10 years. Those things I think have to be done to convince the world that it is worth making major permanent investments in the United States of America.”

- Obama advocates for more father involvement, distributing information in barbershops -
PRESIDENT BARACK OBAMA AT KENNY’S BBQ IN WASHINGTON: “We want to work with them, we want to work with barbershops to figure out how we can get better information to fathers about resources that are available to them, where they can find job training programs, they can find support groups for fathers. Because the more information we're getting out there to folks about, you know, how they can take responsibility for their kids, you know, make sure they're in their child's lives, you know, help support their mother even though their not living with the mother, it makes a huge difference. It turns out that the father being involved, kids are less likely to do drugs. They're less likely, girls are less likely to have teen pregnancy. And so, that's, that message is something that we want to make sure gets out there. And barbershops are a good place to do it.”

- Reid: Republicans love bad news -
SENATE MAJORITY LEADER HARRY REID IN A SENATE FLOOR SPEECH: “Today’s radical Republicans have another agenda. Not hiring more cops, not doing something to stop the teacher layoffs, but their goal is to drag down the economy because it is good for their politics. They believe the more horrible the economy is, the better off they are going to be in November. They love bad news.”

- Moon colonies, trackable immigrants and doughnuts. All on the tip of Newt’s tongue -
JIMMY FALLON JOKES ABOUT NEWT GINGRICH ON HIS LATE NIGHT TALK SHOW: “A few days ago, Mitt Romney visited a restaurant in Iowa and had trouble thinking of the word for doughnut. It's a true story, couldn't think of the word. Newt Gingrich merely responded, ‘That never would have happened if I was the nominee, you guys. Doughnut is on the tip of my tongue! Always. I start all my sentences with doughnut.’”

U.S. Rep. John Nance Garner, D-Texas, ran for president in 1932 while he was speaker of the House. When it became apparent that Franklin Delano Roosevelt, the governor of New York, was going to be the nominee, Garner made Roosevelt a deal. Garner would release his delegates to Roosevelt and in exchange would become the governor's running mate.

When the Roosevelt-Garner ticket won on November 8, 1932, Garner became only the second speaker of the House to transition directly to the vice presidency (the first was Schuyler Colfax, President Ulysses S. Grant's vice president).

After Roosevelt and Garner were re-elected in 1936, Garner began to sour on two things: the job of the vice president and Roosevelt.

The job was largely symbolic with very little responsibility. Garner reportedly became bored with the job and according to historical lore said "The vice presidency is not worth a bucket of warm piss." At the same time, Garner began to disagree with the Roosevelt presidency, particularly on issues such as packing the Supreme Court and government spending.

For that reason, Garner challenged Roosevelt in 1940, hoping to win over the more conservative Democrats. He failed to beat Roosevelt, however, and ended up retiring after serving two terms as vice president.

Gut Check's favorite quote from our research on Garner has to be when labor leader John L. Lewis called the vice president "a labor-baiting, poker-playing, whiskey-drinking, evil old man."

Congratulations to Zachary J. Irwin (@zachirwin) for correctly answering today’s Gut Check trivia question. Twitter informs us that Irwin is a producer for the Weather Channel and we are hoping that he will start sending us weather-based trivia questions. Our first answer: Stratocumulus.