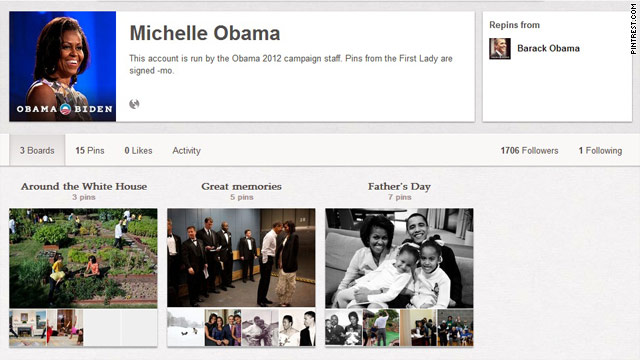 (CNN)– Her husband joined Pinterest in March, and his rival's wife started 'pinning' in February. Now first lady Michelle Obama is diving into the latest social network with new, personal posts reflecting on life in the White House.

In the first category, Obama shared three photos depicting White House life, including a shot of her in the kitchen garden, and a snap of contestants on "The Biggest Loser" doing calisthenics on the East Room carpet.

In Great Memories, Obama posted shots of her wedding day in 1992, as well as another photo from that year showing her and the future president in an embrace.

And in Father's Day, the first lady shares pictures of the president with his two daughters, as well as one photo of Michelle Obama with her parents.

"I'm fortunate to have had two great fathers in my life. My husband and my dad, Fraser Robinson," Michelle Obama writes in the caption.

Michelle Obama's Pinterest is run by the Obama for America campaign, as is her husband's. President Barack Obama first joined the site in March.