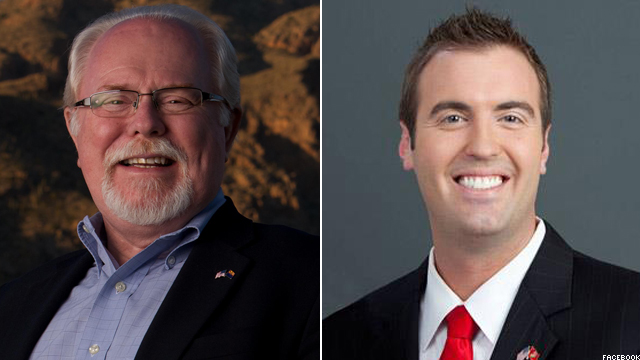 "Just about 10 minutes ago I received a call from Jesse Kelly," Barber said. "It was a most gracious call. And Jesse said, 'congratulations on your victory and I know you will make a great congressman for Arizona.' How about that?"

A former Giffords aide, Barber was critically injured during last year's mass shooting that killed six and injured 13 others, including Giffords, who suffered a gunshot wound to the head. She resigned in January, about a year after the shooting.

Giffords, along with her husband, Mark Kelly, stumped for Barber this weekend in Tucson, making a rare public appearance as she undergoes rehabilitation in Texas. She also accompanied Barber as they cast their ballots Tuesday.

While special elections during the summer generally drum up little attention, the Arizona race gained high-profile status because of the interest surrounding Giffords. It also marked the final Congressional election prior to November.

Outside money poured into the race from super PACs supportive of both sides. The Republican National Congressional Committee as well as the Democratic Congressional Campaign Committee each ran ads in the state.

Both campaigns centered around jobs and the economy, with the Republican candidate taking a national approach. Kelly made defeating President Barack Obama part of his message, as his supporters attempted to turn the race into a referendum on the president.

Barber, a moderate Democrat, was mild in his support for Obama due to Republican leanings in the 8th Congressional District. The district has voted red in the past three presidential elections. He instead, largely crafted a local message of helping the middle class in Southern Arizona.

"I'm focused on, what are the issues here? What are people concerned about in Southern Arizona? They tell me plenty about that, about middle class concerns, about seniors who are concerned about veterans," Barber said Monday on CNN's "Piers Morgan Tonight." "They want someone to go to Washington who is going to be focused on their issues."

While Barber has won the seat, he will only hold it for six months and will have to start running for re-election almost immediately.

In the fall, district lines in Arizona will move slightly and will become more amenable to Democrats, though still competitive.