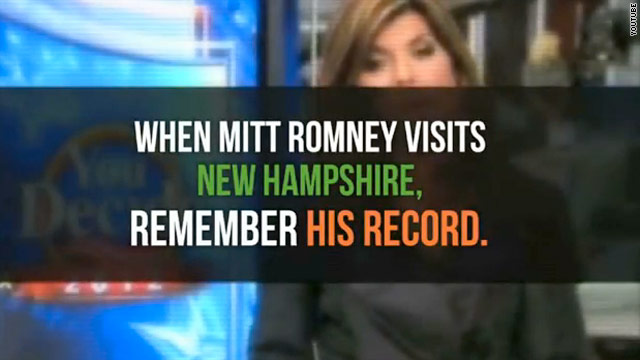 Priorities USA Action will air the spot Friday as Romney returns to New Hampshire to kick off his six-state, five-day bus tour. Romney's first stop will be at the farm in Stratham where he officially declared his presidential bid last June.

News reports then flash on-screen about the shuttering of the Holson Burnes plant in Claremont, New Hampshire, in 1992.

"In business, Mitt Romney profited from bankruptcies and layoffs while families in New Hampshire and across the country lost everything," Burton wrote. "Romney made millions even when he drove companies into the ground, workers lost their jobs, and promised retirement benefits were eliminated."

Democrats began targeting Romney's record at Bain beginning in May, after the former Massachusetts governor became the presumptive Republican nominee for president. Obama's campaign, along with his aligned super PAC, sought to portray Romney as a corporate raider interested only in securing profits for himself and his company.

Romney's campaign say the attacks ignore Bain's successes, including creating jobs at well-known companies like Sports Authority and Staples. They also say the attacks reflect an anti-business attitude from the White House.

In a statement Thursday, a Romney campaign spokeswoman said the Priorities USA Action ad was intended to distract from a failed economic message.

"President Obama's allies are using false attacks to distract voters from the President's out of touch comments that the private sector is 'doing fine,'" Amanda Henneberg wrote. "Middle-class Americans aren't doing fine and President Obama's policies have not helped. 23 million Americans are struggling for work, incomes have fallen, and gas prices have doubled. On day one, Mitt Romney will put in place policies that will get the economy moving, bring back jobs, and help the middle class."

Some of Obama's higher-profile surrogates also appeared skeptical of the Bain attacks, including Newark, New Jersey, Mayor Cory Booker and former president Bill Clinton. Both pointed to the successes in Romney's record, saying he was a good businessman.

On Thursday, Bain Capital issued a statement responding to the Priorities USA ad, saying the suggestions about the firm's involvement with Holson Burnes were "simply false."

"The Claremont, NH plant was closed in 2005, 10 years after Bain Capital sold its ownership stake in the company. During its ownership Bain Capital grew Holson Burnes dramatically, investing millions of dollars and a great deal of time to improve Holson Burnes' competitiveness and building the Claremont, NH plant into the world's largest manufacturing facility for photo albums," the statement read.

It continued, "Bain Capital is focused on growing great companies and improving their operations. Mitt Romney retired from Bain Capital over 13 years ago. We are not a political organization, and take no public position on any candidate. We are extremely proud of our employees and management teams, who have grown revenues in over 80 percent of our 350 companies, which include over 100 start-up investments."