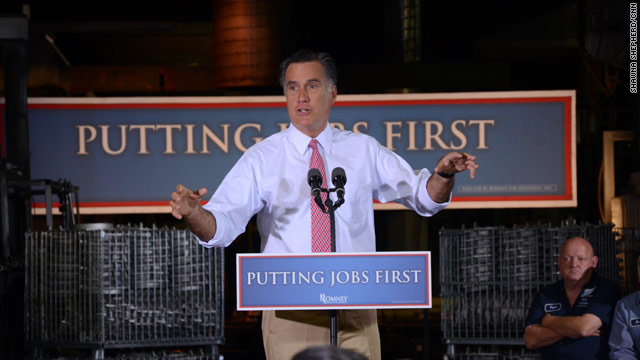 "Now you may have heard that President Obama is on the other side of the state and he's going to be delivering a speech on the economy. He's doing that because he has not delivered a recovery for the economy," Romney said during a speech in Cincinnati. "But don't forget, he's been president for three and a half years. And talk is cheap. Action speaks very loud."

"The president said that if we let him borrow $787 billion for a stimulus he'd keep unemployment below 8% nationally. We've now gone 40 straight months with unemployment above 8%. But then he'll say: 'Well, but the things he's been doing have been good and helped create growth and put people back to work.' Oh really? Go check on that."

The presumptive Republican presidential nominee suggested people go out and ask businesses and employees so they can judge for themselves how the economy is doing.

"I think it's more likely he's going to say give me four more years even though I didn't get it done in the first three and a half. And my experience in thinking about people who I want to have work for me, whether it's my doctor or the person that's going to be painting the house, I want to make sure they did a good job the first time and if they didn't I want someone who can do a better job," Romney said.

In Ohio, according to the U.S. Bureau of Labor Statistics, the unemployment rate is 7.4%, lower than the national average. The battleground state has seen that number drop from 8.6% when Obama was inaugurated in January 2009.

That somewhat contradicts the gloomy economic picture Romney described in his speech held at a Seilkop Industries manufacturing plant.

Russ Schriefer, a senior adviser to the Romney campaign, told reporters Wednesday any success in Ohio can be attributed to the Republican Gov. John Kasich, not the president.

"I think anything that's happened in Ohio, certainly Gov. Kasich has been helpful to encouraging business in Ohio. And it just shows, whether it's Ohio or New Jersey or Indiana, when you have Republican governors who encourages business, things are better," Schriefer said in a conference call, adding that Romney would be more like Republican governors who are "more pro-business and less hostile to job creation."

Dressed in beige pants, a shirt and tie with his sleeves rolled up, Romney spoke without a TelePrompTer before no more than 200 people, contrasting Obama's speech in Hamilton County before more than a thousand people.

"If you think things are going swimmingly, if you think the president's right when he said the private sector is doing fine, well then he's the guy to vote for," Romney said. "But when he said that, there was such an outpouring of response from the 23 million Americans out of work or underemployed that I think today he's not going to say it again."