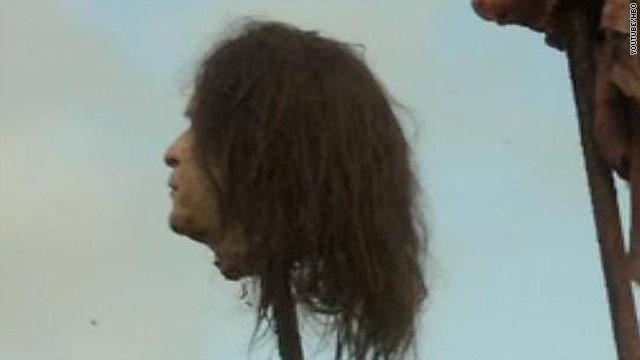 A prop head of former President George W. Bush, wearing a long stringy wig and covered in mud, was one of several severed parts featured in the scene, which came in the final episode of the show's first season. The medieval series chronicles often-bloody struggles between families for control of the fictional Seven Kingdoms of Westeros.

The head may have disappeared into the background had the shows creators not mentioned it in the DVD commentary.

"George Bush's head appears in a couple of beheading scenes. It's not a choice. It's not a political statement. We just had to use whatever heads we had lying around," one of the creators says.

HBO and CNN share a parent company, Time Warner. On Wednesday, the network issued a statement apologizing for the head.

"We were deeply dismayed to see this and find it unacceptable, disrespectful and in very bad taste," the network said in a statement. "We made this clear to the executive producers of the series who apologized immediately for this careless mistake. We condemn it in the strongest possible terms and have halted all future shipments of the DVDs, removed it from our digital platforms and will edit the scene for all future airings on any distribution domestic or international.”