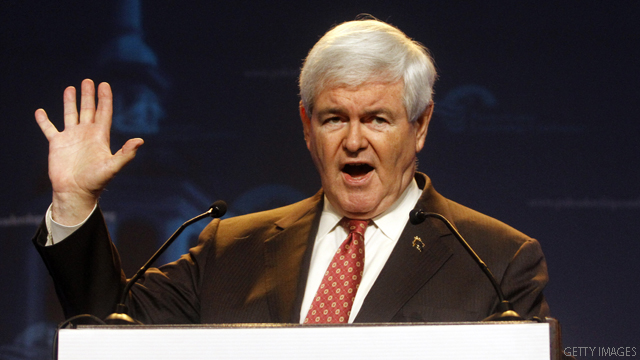 Gingrich: 'Yes we can' is now 'Why we couldn't'

Washington (CNN) - Newt Gingrich resurfaced one of his most controversial lines from the Republican primary season, saying on Friday it was a matter of "patriotic duty" to defeat President Barack Obama in November.

"Barack Obama and the values he represents and the amateurish incompetence he has proven are a direct threat to the survival to America as we know it, and defeating him is a national, patriotic duty," Gingrich said at the Faith and Freedom Coalition conference in Washington, D.C.

In February, Gingrich made headlines after describing the president as a national security risk, hitting him on foreign policy and accusing him of pandering to Islamic countries.

Gingrich, who ended his presidential bid in early May, has since endorsed presumptive GOP presidential nominee Mitt Romney but largely trains his fire on Obama, rather than boosting the candidate he now supports.

"People ask me the difference between Romney and Obama in terms of the future. I said if you think of the nightmare of an Obama second term, Romney's first term could be a dream by comparison," Gingrich said.

While the former House speaker has appeared at private fund-raising events with Romney, he has yet to join his former foe in a public appearance.

The two candidates, along with super PACs supporting their bids, engaged in aggressive attack strategies earlier this year during the first few nominating contests, creating a multi-million dollar showdown that Gingrich credits for his decline in the polls.

Still showing some resistance to a full-throated embrace of Romney and his platform, Gingrich, who painted himself as the conservative alternative to the former Massachusetts governor, emphasized on Thursday the need to "work with"–but not surrender to–Romney and the Republican Party.

Gingrich said he envisions a country in which the American public is "working with Gov. Romney, working with a Republican House–not abdicating to them–(but) working with them."

However, the former speaker reserved most his criticism for the president, arguing Obama has failed to deliver on his campaign promises.