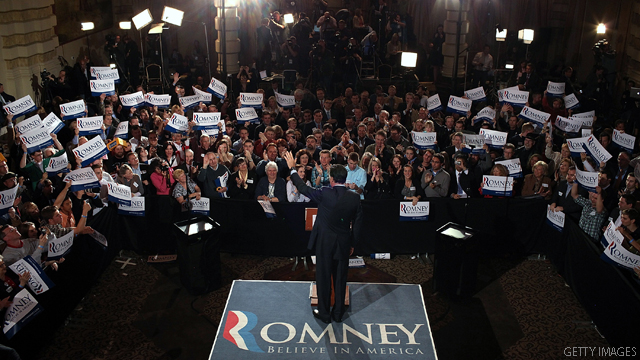 Romney's bus ticket to 'their turf'

Boston (CNN) – Mitt Romney embarks Friday on a bus tour his campaign considers to be on "their turf," according to a Romney official who was referring to the six battleground states that President Obama won in 2008.

"We're certainly campaigning on their turf as opposed to campaigning on what would be considered our turf," Senior Romney Adviser Russ Schrieffer told reporters Friday morning at campaign headquarters.

In his first speech in New Hampshire, Romney will attack President Barack Obama for a speech he made Thursday on the economy.

"Yesterday the President gave a speech. A Very. Long. Speech," Romney will say, according to advance excerpts of the speech. The periods between "very," "long," and "speech" were included.

Romney will continue, "You might have thought that it would be a moment when he would acknowledge his policy mistakes and suggest a new course. But no. He promised four more years, of more of the same. Four. More. Very. Long. Years."

Romney will also portray the federal government as overbearing and harmful to small businesses.

"For so many Americans the distance between their town and the City of Washington has never seemed so far," Romney will say. "The federal establishment has never seemed so hostile or remote – so disconnected from economic reality, and yet so willing to use restrictions and regulations, taxes and fines, commissions and czars to direct our daily lives."

Schrieffer, in a rare in-person briefing with 50 political reporters Friday morning, dismissed the suggestion that while those states might have voted Democratic the last presidential cycle, the smaller towns Romney is visiting may be friendlier Republican territory.

"Our intent is to go to places that are off the beaten track and not really look at it as where we need to pick up votes in each state. We want to win each of these states but it's not quite as calculated as that," he said.

Romney kicks off his tour in Stratham, New Hampshire at a farm where he announced his presidential bid last June. He has devoted a significant amount of time appearing at fund-raising events, many of them closed to the media, but according to his campaign the bus tour, Romney's first major campaign swing of the general election, will be devoted strictly to campaign events.

"Gov. Romney has the opportunity to campaign in urban areas a lot. This is an opportunity over the next five days to go to places that are a little bit off the beaten path and visit towns and cities where people are really struggling in this Obama economy," he said.