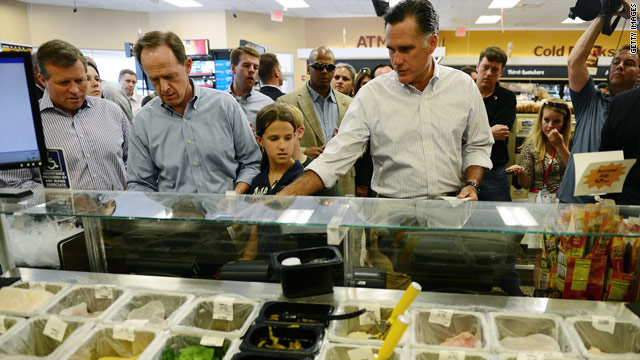 The Democratic National Committee has staged stops nearby or along Romney's six-state bus tour, waging their own message campaign called "Romney economics: The middle class under the bus tour."

Rendell scheduled an appearance at the same gas station and convenience store chain in Bucks County that was supposed to be one of three stops for Romney on Saturday.

Reporters and camera crews spotted as many as 150 protesters.

Romney's campaign bus was less than a half-hour away from the Wawa on John Fries Highway when journalists were told his bus would be stopping elsewhere.

Luckily, in Pennsylvania, there are a lot of Wawas to choose from, so the campaign was able to divert Romney's bus to another store just a few miles way.

When the GOP candidate arrived, he greeted young kids in little league uniforms and went inside to order a meatball sub. Not a protester was in sight.

Romney and his campaign wouldn't openly acknowledge the Wawa change, other than to point out Rendell's propensity to say things that could disappoint the Obama White House and his Democratic allies.

“My surrogate is former Gov. Rendell, who said I can win Pennsylvania, so I'm happy to hear that," Romney said.

Since his "surrogate" was there, Romney said, "we decided to come to a different place."