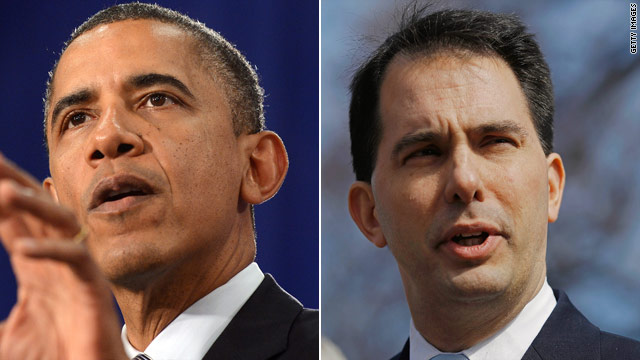 (CNN) - Unemployment was on the minds of President Barack Obama and Wisconsin Gov. Scott Walker on Saturday, as they delivered weekly addresses calling for leadership and action to put people back to work.

Walker touted the results achieved in part by controversial measures he took, including restricting the right of state employees to collectively bargain. Unions and others responded to his moves by trying to oust him, an effort that ended this month when Walker survived a recall vote.

He said his state's unemployment rate dropped and a budget deficit turned into a surplus since he took office in early 2011.

Obama repeated his call for Congress to pass jobs and economic legislation he proposed last fall.

"Republicans in Congress haven't lifted a finger," he said. "They'd rather wait until after the election in November."

The most recent jobs report, released at the beginning of June, showed the weakest job growth so far this year: 69,000 jobs created in May, while unemployment rose slightly to 8.2% as new graduates entered the work force.

Politics pervaded the addresses as each mirrored the charges the two parties have lobbed back and forth in previous weeks, when debating energy, economics and jobs.

Walker pointed to growth in Wisconsin private sector employment - 41,000 new jobs since he took office in January 2011 - as well as a budget surplus rather than deficit and an improved business climate ranking by the publication, Chief Executive Magazine.

To keep the economy growing, Obama said Congress should appropriate money to states to fund hiring of teachers, police officers and firefighters, as well as fund infrastructure construction, pass a tax break for small businesses that hire, and approve other measures.

But despite the economic gloom, both leaders struck an optimistic chord.

"Every problem we face is within our power to solve," Obama said. "I'm ready to work with anyone – Republican, Democrat or Independent - who is serious about moving this country forward. And I hope members of Congress will join me."

And Walker concluded, "We'll have to make some tough choices but there is no doubt that it is worth it. Let this be the moment in history where we can tell our children and our grandchildren that we helped restore our country's greatness again. I believe we can because I believe in America."