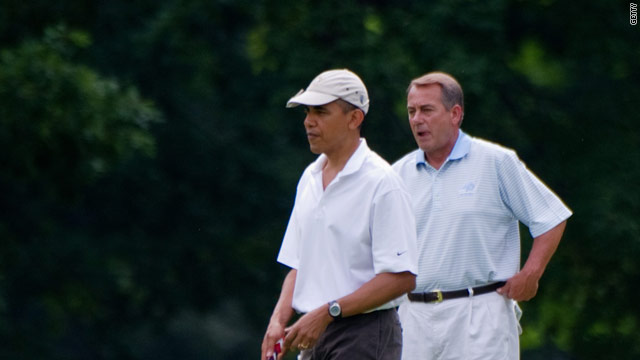 'Golfer-in-chief' hits 100th round as president

(CNN) – President Barack Obama celebrated Father's Day on Sunday with a round a golf – his 100th as president, according to a calculation by the television travel pool.

Obama marked the milestone with a game at the century-old Beverly Country Club in Chicago, and hit the links with regular partners Eric Whitaker, Marty Nesbitt and Marvin Nicholson. The president was in Chicago to celebrate the wedding of senior adviser Valerie Jarrett's daughter, which took place Saturday, and will fly to Cabo San Lucas, Mexico, later Sunday for a meeting of the G-20.

Obama frequently makes trips to the Washington suburbs to play golf on the weekends – in the past several months he has played the course at Joint Base Andrews in Maryland and Fort Belvoir in Virginia. His partners during the three years he's been in office have included former President Bill Clinton, Vice President Joe Biden, House Speaker John Boehner and Ohio Gov. John Kasich.

Obama's propensity to spend his weekends on the links hasn't gone unnoticed by his Republican rivals. Mitt Romney, the presumptive GOP presidential nominee, portrayed the golfing as insensitive to the plight of unemployed Americans.

"I must say I scratch my head at the capacity of the president to take four hours off on such a regular basis to go golfing," Romney said in April during a radio interview. "I would think you could kind of suck it up for four years, particularly when the American people are out of work."

Romney said in May that he wouldn't challenge Obama to a round of golf, but instead would compete in his preferred form of recreation – waterskiing.

Despite Romney's criticism, Obama has joined a long line of presidents who enjoy relaxing on the golf course. According to Martin Davis, editor and publisher of The American Golfer, 15 of the past 17 presidents have been golfers.

During Dwight D. Eisenhower's time in office, the five-star general played 210 rounds at Augusta National, home of the Masters. Woodrow Wilson logged 1,000 rounds during his two terms in office, according to Davis.

John F. Kennedy, Lyndon Johnson and Gerald Ford were all avid golfers, all playing during their time in the White House.

The two Bush presidents – George H.W. and George W. – are both linked to golfing royalty. George Herbert Walker, the elder President Bush's grandfather, donated the Walker Cup, a trophy awarded to the winner of a biannual amateur team contest.

Both Presidents Bush golfed while in office, though George W. Bush cut back on playing during the wars in Iraq and Afghanistan out of a show of respect for U.S. troops.