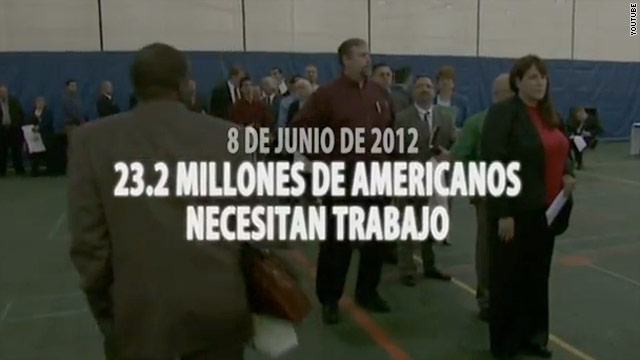 (CNN) – Mitt Romney unveiled a Spanish language version of an English ad he released last week targeting President Barack Obama's record on the economy, days after the president announced a new policy aimed at stopping the deportation of some young illegal immigrants.

Monday's translated spot, "¿Van Bien?," mirrors the "Doing Fine?" spot made public by the campaign Thursday as part of a media buy in seven battleground states. The campaign did not respond to a request for comment regarding where the Spanish version will run.

The commercial highlights the current unemployment rate and number of underwater homeowners interspersed with Obama's much capitalized on "the private sector is doing fine" line. Spanish versions of ads touting Romney's "Day One" agenda were released last month but only aired in Raleigh, North Carolina with the backing of $10,000, according to CNN's ad consultant Kantar Media/CMAG.

Monday's Spanish efforts came amid renewed conversations about illegal immigration after the president announced a shift in his immigration policy Friday. The changes would allow people younger than 30 who came to the United States before the age of 16, pose no criminal or security threat and were successful students or served in the military to receive a two-year deferral from deportation.

Romney, who pledged to veto the DREAM Act, a law that would provide a legal pathway to citizenship for children of illegal immigrants, earlier in the election cycle, declined to say over the weekend if he would overturn the new policy if elected president.

The presumptive Republican presidential nominee said his administration would seek longer-term solutions to fix the problem, adding that Obama's decision would become void after his rules were put in place.

"It would be overtaken by events if you will, by virtue of my putting in place a long-term solution, with legislation which creates law that relates to these individuals such that they know what their setting is going to be, not just for the term of a president but on a permanent basis," Romney said Sunday on CBS' "Face the Nation."

Although Team Obama insisted the move was not directly political, Democrats and Republicans are lobbying hard for the Latino vote, the largest growing voting bloc in the country and a group Obama won overwhelmingly in the 2008 election.

In the latest example of his support from the Latino community, the president's re-election team on Monday announced the support of famed talk show host and community leader Cristina Saralegui, with accompanying videos in Spanish and English.

"This election won't just affect us right now, it will have an impact on Latinos for generations to come. So, make sure you're registered to vote then start a conversation," Saralegui said in the minute-long video.

"Cristina is one of the most trusted names in the Hispanic community and we're honored to have Cristina be a spokesperson for the campaign, speaking directly to Hispanic voters about the President's accomplishments," Jim Messina, Obama's campaign manager, said in a statement.