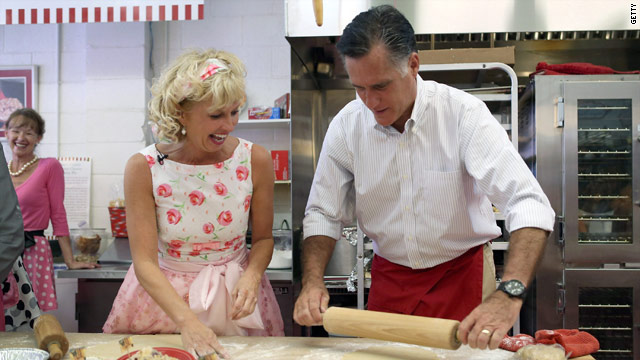 That practice, it seems, is paying off.

The presumptive GOP nominee - known for his stiff manner and occasionally awkward jokes on the campaign trail - has garnered positive reviews on this rambling ride through small-town America, with a growing corps of reporters in tow.

On Tuesday Romney continued his forays into retail politics with a stop at a kitschy 1950's-era pie shop called Sweetie-licious.

The prank-pulling politician declined to don a hot pink apron (the brilliant pink hue mirrored the walls of almost everything in the shop), saying: "I don't care if I get dirty."

When owner Linda Hundt offered him a red apron, though, he accepted.

Romney - who confided he liked "cherry pie, blueberry pie and rhubarb" but was "not a fan of strawberry," displayed pie-making skills far inferior to those of his wife, Ann's.

"Is this a race, Ann?" Romney teased as she deftly handled the dough.

Then, when he inexpertly laid his crust in the pan, Hundt told Romney it was one of the best jobs a male had ever done with the crust.

"That's an important modifier," he joked.

Moments earlier, Romney displayed a similar flexibility when dealing with protesters shouting during his speech.

Several dozen people corralled across the street from his event began chanting "four more years" as Romney spoke to voters on the stump.

Many of the activists held signs that read: "Romney Economics: The Middle Class Under The Bus."

Romney turned to acknowledge the jeers mid-way through his speech, and incorporated the protesters' words into his remarks.

Even Romney's stump speech has evolved over a series of appearances this week, as the governor tests new lines in front of new audiences.

Now standard is his answer to the reviving economies in many states he has visited. Even though some states are improving, he says, it's not thanks to President Obama's leadership.

"Unlike this president, I will get America on track to do something that a lot of people talk about and a few Republican Governors have actually done," Romney told several hundred supporters in DeWitt, Michigan Tuesday. "I'm going to cut back on the size of government and get America to finally be on track to have a balanced budget."

It is clear the GOP hopeful has fed off voters' support over his six-state span of events. He has confidently predicted wins in Pennsylvania, Wisconsin and Michigan - all states that have posed a generally uphill battle for Republicans in recent election cycles.

At a German-themed village in Frankenmuth, Michigan, Romney offered a response to critics who say the Republican can't compete with his opponent's lofty speaking skills.

"You're not here because I'm some spectacular speaker, you all know better than that," he said Tuesday morning. "You know, instead that this is America and America is the answer to all good things and we are caring about our country we want to get it on track again, to care for ourselves and for the people of the world that love liberty!"