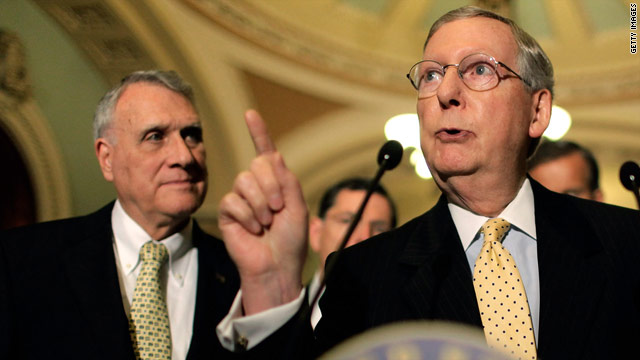 "I think most of my members are interested in learning what Gov. Romney has to say about this issue, and we're going to withhold judgment, most of us, until that time," McConnell said, in what amounted to a slightly awkward vow of silence from a politician who is typically proficient at shredding the president's positions.

"Then our members are going to be discussing his view on this and I think many of them will have similar views. Others will not," McConnell added.

At issue is the president's unexpected announcement Friday that his administration will no longer deport many young immigrants who were brought here illegally by their parents. Romney and other Republicans have complained that it was a mistake – and maybe unconstitutional - to bypass Congress on such an important issue but they've also made clear they would like to find a solution for the hundreds of thousands of young people impacted by the policy.

"The president doesn't have the right under the Constitution to pick and choose the laws he wants to enforce," said Sen. Jon Kyl, R-Arizona, who has worked on Republican legislation with Sen. Marco Rubio, R-Florida, and others to address the issue. "I don't think there are very many people who don't believe that a change that would clarify the status of these young people is not warranted."

"Everyone I think has empathy for these young people and wants to address the issue," said Sen., Rob Portman, R-Ohio, who is considered to be on the shortlist to be Romney's running mate. "A legislative solution would have been one that provided more certainty."

Privately, one top Republican leadership aide, told CNN the lack of a forceful response is in part because the new policy is getting strong support in public opinion polls and Republicans are much better off keeping their focus on the high unemployment rate and the struggling economy.

When a reporter asked McConnell why is it taking so long to formulate a response," the disciplined communicator responded, "I'm going to give you the same answer I just did. We're going to wait until we see what Gov. Romney has to say about this and then we'll be happy to respond."