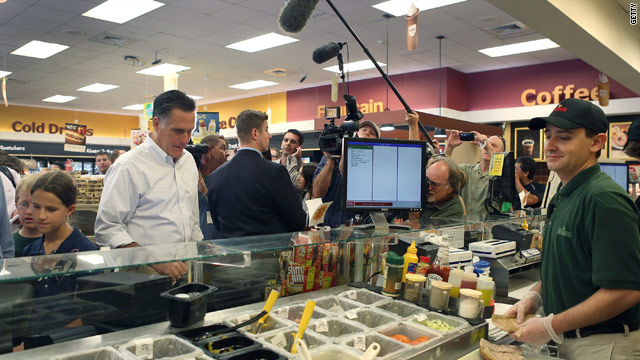 MSNBC serves up second round of 'sandwiches' after controversy

(CNN) - MSNBC host Andrea Mitchell aired a longer cut from a Mitt Romney stump speech on her Tuesday program after facing criticism from conservatives that the clip, which aired on her Monday morning program, took his remarks out of context.

The first cut suggested Romney's remarks focused somewhat vacuously on sandwiches. But what was cut from the clip which aired was Romney's actual explanation for telling the story of ordering sandwiches at a Quakertown, Pennsylvania WaWa.

"People in the private sector have learned to compete," he said after describing the touchscreen ordering system at the lunch counter. "It's time to bring some competition into the federal government and to get it smaller and to have it respond to the customers which are you."

Mitchell said on Tuesday that both the Romney campaign and Republican National Committee reached out to her show after the original segment aired. She then aired a longer version of the video, and said the program "didn't get a chance to play that" on Monday.

In the shorter version which aired Monday, Romney said, "I was at WaWas, I went in to order a sandwich. You press the little touchtone keypad. Right? You just touch that, and you know the sandwich comes.

The original clip ends and Mitchell repeats, "It's amazing," sharing a laugh with her guest, Washington Post reporter Chris Cillizza.