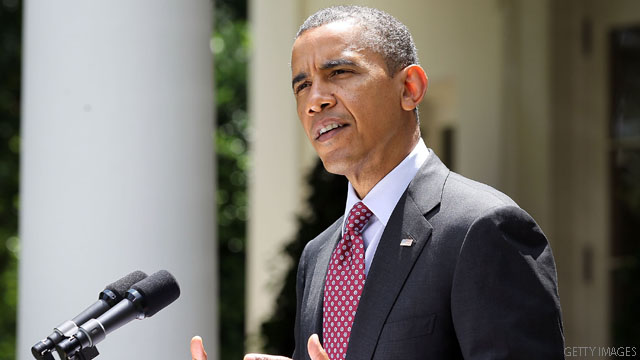 The Bloomberg Poll released Tuesday showed 64% of likely voters backed the shift, which would allow the children of illegal immigrants who meet certain requirements to stave off deportation for two years. Although 30% of those surveyed disagreed with the president, coveted independent voters agreed with the decision by better than a two-to-one margin.

However, support was divided along party lines. Fifty-six percent of likely Republican voters opposed the decision while 86% of Democrats issued praise. Sixty-six percent of independents backed the policy change, while 26% disagreed.

Obama announced the shift on Friday, saying it will make U.S. immigration policy "more fair, more efficient and more just." The changes would allow people younger than 30 who came to the United States before the age of 16, pose no criminal or security threat and were successful students or served in the military to receive a two-year deferral from deportation.

Mitt Romney has faced a sizable deficit among Latino voters and despite pledging to veto the DREAM Act, a law that would provide a legal pathway to citizenship for children of illegal immigrants, earlier in the election cycle, he declined to say over the weekend if he would overturn the new policy if elected president.

The latest poll results underscore a challenge for the presumptive Republican presidential candidate as he attempts to court the Latino vote, the nation's largest ethnic minority who strongly supported Obama's candidacy in 2008.

Republican senator and high profile Romney backer Marco Rubio dropped plans on Monday to introduce his own immigration legislation that would grant work visas to some young Americans who entered the U.S. illegally. Rubio spokesman Alex Conant said Obama's announcement "took away our momentum and made the politics a lot tougher."

Obama and Romney are scheduled to address the National Association of Latino Elected and Appointed Officials annual conference later in the week in Florida, a key general election battleground state with a large Hispanic population.

Both candidates also released Spanish language ads this week. Romney unveiled a spot Monday attacking the president's record on the economy. Team Obama released a spot Tuesday promoting the national health care law that will run in Nevada, Colorado and Florida featuring Latino talk show host Cristina Saralegui, who endorsed the president after the policy shift, according to the campaign.

The Bloomberg National Poll surveyed 734 likely voters between June 15 and June 18 with a sampling error of plus or minus 3.6 percentage points.