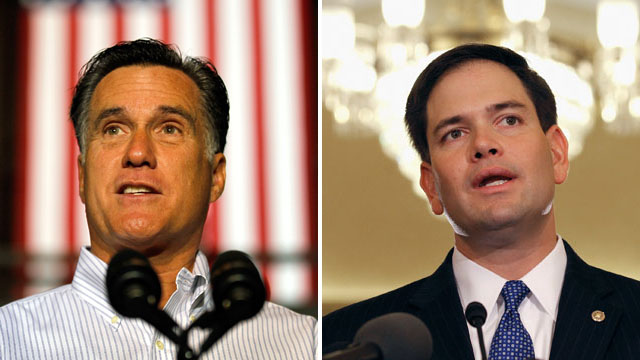 "I get a kick out of some of the speculation that goes on," Romney said on Fox News. "I'm not going to comment on the process of course, but I can tell you this: only Beth Myers and I know who is being vetted."

The report from ABC News said Rubio, thought to be on a list of potential picks, was not being vetted to serve in the role. The story cited "Republican sources" who said Rubio had not been asked to complete any questionnaires or turn over any financial documents.

As acknowledged in the story, it is possible Rubio might still receive a background check. Romney tapped his former chief of staff Myers two months ago to head the search.

Rubio, the first term Florida senator, is a rising star within the Republican Party and has appeared with Romney on the campaign trail. Despite his national image, Rubio has repeatedly said he would not discuss the V.P. process in public, insisting he plans to remain a U.S. senator.

The son of Cuban immigrants, Rubio has focused his attention on a Republican plan to address immigration for young Americans who entered the U.S. illegally. However, following President Barack Obama's announcement Friday of a plan for children of illegal immigrants who meet certain requirements to stave off deportation for two years, Rubio dropped plans to introduce his own legislation.

On Monday, Rubio spokesman Alex Conant said Obama's announcement "took away our momentum and made the politics a lot tougher."