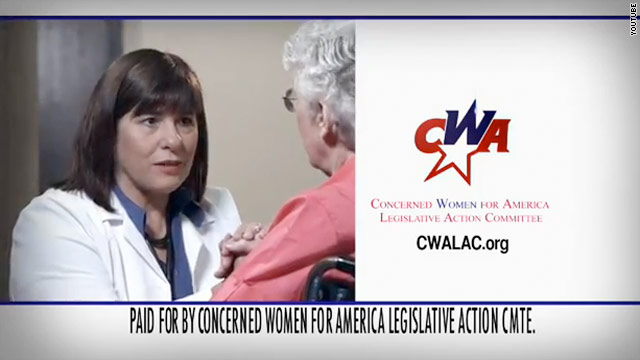 Concerned Women for America said it's dropping a whopping $6 million on a commercial that will begin airing Wednesday nationwide on cable and in six key swing states.

The 60-second ad features a family practitioner, Dr. Ami Siems, expressing concern about the health care measure, which was passed in 2010 with Democratic support but now awaits a decision on its constitutionality by the Supreme Court.

"Everyone agreed we needed reforms - but this new health care law - it just isn't fixing things," Siems says in the ad, adding that the law will pile billions onto the federal deficit and increase government regulation.

"I don't want anything to come between my patients and me - especially Washington bureaucrats," she says.

The ad buy comes one week after the group announced a get-out-the-vote initiative that targets women in certain battleground states.

"Our members are highly energized on the aspects of the President's health care law; we are making a significant financial investment on this issue because we mean business," said the group's president, Penny Nance, in a statement.

The six states in the ad buy include Minnesota, New Mexico, and Wisconsin-three states that lean toward Obama, according to CNN's Electoral Map. The ad will also run in Iowa, New Hampshire, and Virginia, all of which fall under the "toss-up" category, according to CNN analysis.