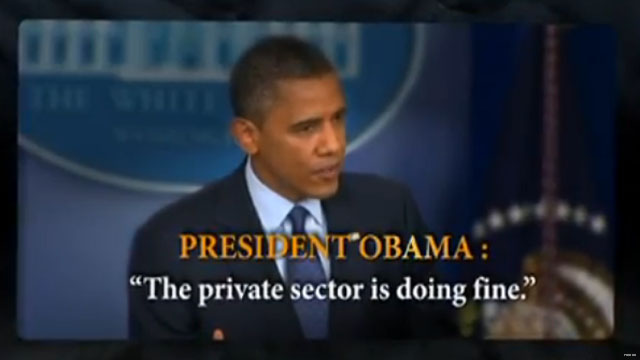 Washington (CNN) - It is the line Mitt Romney and his allies hope keeps giving.

The super PAC backing Mitt Romney, Restore Our Future, is up Wednesday with a $7.6 million ad buy featuring a spot going after President Barack Obama's line at a recent White House press conference that "the private sector is doing fine."

The commercial first flashes on the screen how the nation's unemployment rate just rose to 8.2% and how the country has had 40 straight months of unemployment over 8%. Then it inserts the president uttering the “private sector” line. Then the ad points out that 23 million Americans cannot find full-time jobs and 30% have been out of work for more than a year, while reiterating the president's line again.

This ad comes as the Romney campaign itself is in the second week of its own commercial – its first negative ad of the general election media campaign – attacking the president over the gaffe, which showed many of the same dire economic statistics.

During the president's June 8th press conference, he touted that 4.3 million jobs were added in the private sector in the past 27 months. He was trying to draw a distinction between the private sector's job performance and troubles in the public sector.

"The private sector’s doing fine," he said. "Where we're seeing weaknesses in our economy have to do with state and local government, often times cuts initiated by, you know, governors or mayors who are not getting the kind of help that they have in the past from the federal government and who don't have the same flexibility as the federal government in dealing with fewer revenues coming in."

Republicans immediately pounced blasting the president and his re-election campaign for the gaffe. Later that day, Obama told reporters he knew the economy was not doing fine.

This marks the first time in the general election ad wars that both the Romney campaign and Restore Our Future are on the air at the same time. Team Romney just bought almost $3 million for another week of advertising.

As CNN reported Tuesday, this is the PAC's first buy in over a month and will run in the same nine battleground states as the spots from the Obama re-election team, which criticize Romney’s record as Massachusetts governor and his economic message.

A money breakdown of the Restore Our Future campaign running through June 30th: