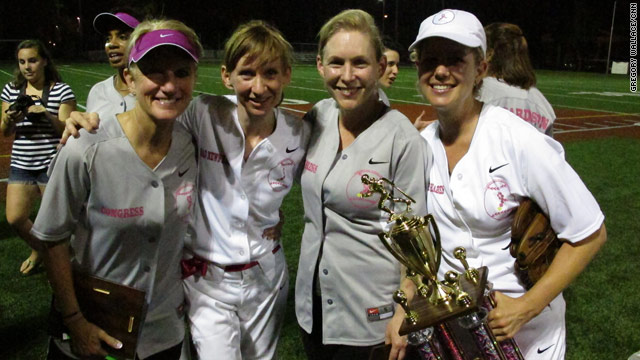 WASHINGTON (CNN) - The Members were down 11-1 in the bottom of the sixth when from the stands arose a chant that is seldom heard.

And the branch of government - the butt of jokes for its logjam - began to get things done.

Alas, the late rally Wednesday evening by the Congressional women’s softball team – and another at the bottom of the seventh to round out regulation - wasn't enough to overcome their rivals: journalists who spend their days covering the Capitol.

The "Bad News Babes," as the journalists called themselves, bested Congress 13-10 in a game that was a near blowout for most of the evening.

The Babes first allowed the bases to load in the sixth inning as Congress appeared poised for an 11th-hour comeback. Roll Call's Abby Livingston was selected MVP for her pitching prowess. She was assisted by ABC News’ Gregory Simmons.

It was the members who were up on the board first, when Florida Rep. Debbie Wasserman Schultz ran in off a single.

For her to score first was perhaps fitting: the Florida Democrat had the idea for the game, which the breast cancer survivor pitched to Rep. Jo Ann Emerson four years ago. Her final at-bat last year was that game’s winning RBI.

"Let's do it bipartisan," Wasserman Schultz remembers saying, "and she agreed."

They did it as a benefit, raising money for the Young Survival Coalition, which aids young women affected by breast cancer. Wasserman Schultz was diagnosed at age 41 with the cancer.

Congress displayed its bipartisan and bicameral aptitude early, ending the media’s first at-bat with a double play. Wasserman Shultz then stepped to the plate, was walked and, between jokes about the day’s hefty legislative agenda, scored.

But the second inning went to the Babes, who came out with a 4-1 lead, including a sportsmanship penalty assessed against the Congress team after one member threw her glove, the Babes’ coach said.

By the time the Members took their turn at bat in the fifth, the score was 8-1, and by the bottom of the sixth, 11-1.

Were there a scorecard on Wednesday, it would have read with plays yet unfamiliar to many in the halls of Dirksen or Rayburn.

Sen. Kelly Ayotte with a single to left field. Sen. Kirsten Gillibrand with a strikeout. Rep. Kathy Castor with a full count.

And for the reporters: NBC News’ Shawna Thomas with a single. CNN’s Brianna Keilar to second. An out at the hands of ABC News’ Amy Walters. CNN’s Lisa Desjardins stares down the pitch for a walk.

Both teams touted their morning practices, and when it was suggested that the Congress team had begun practicing at “spring training,” color commentator Andrea Mitchell of MSNBC was quick with her sarcastic response.

She quipped, "Oh, you Members have been so busy getting so much done."