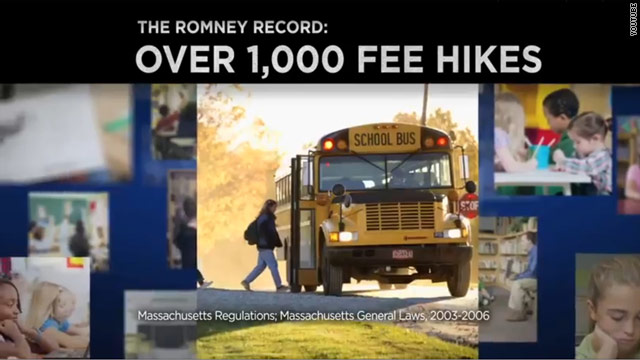 The anti-Romney spots, called "Mosaic" and "Come and Go," started airing Thursday and go after the Republican presidential candidate both on his time as Massachusetts governor, claiming he raised more than 1,000 taxes and fees more than $1.5 billion, and for his tenure as head of the equity capital firm Bain Capital, saying he shipped jobs to China and Mexico.

Team Obama also just started airing an ad touting the president's signing of a law guaranteeing fair pay for women and vowing to do more to help promote fairness for them.

While the Obama campaign unveiled the ads earlier this week and announced where they would air, it did not disclose the buy details.

According to the ad buying source here is the breakdown of the $4.85 million ad buy:

The president's re-election effort had previously bought $12.8 million for ad time running through July 2nd in 9 battlegrounds when it unveiled a commercial going after Romney's record as governor of Massachusetts and the state's job performance during that tenure.

The Romney campaign responded to its counterpart's new media campaign by saying "these misleading ads are the latest effort by the Obama campaign to distract attention from the President's failed policies that have led to high unemployment and falling incomes."

Romney's campaign this week started airing just under $3 million worth of ad time for four new, separate spots in the battleground states of Iowa, North Carolina, Ohio and Virginia. Each commercial touts actions Romney would take in the first 100 days if he is elected president ranging from repeating the administration's health care overhaul to repealing regulations to cutting taxes.

Obama's re-election campaign is enjoying an almost 5 to 1 advertising advantage over the presumptive Republican nominee. Obama's latest buy brings the re-election's total for its general election media campaign to $64.4 million compared to $13.4 million for Romney. Romney, though, is being helped by millions of dollars in ad buys by several super PACs and advocacy groups which are out-raising and outspending their Democratic counterparts.